Toledo is surrounded by radioactive waste and two Nuclear Power plants, Davis Besse and Fermi 2 that sit on the shores of Lake Erie. High levels of radioactivity have been detected in and around the Oregon hazardous waste landfill Envirosafe, that sits above Toledo's drinking water lines, 2 miles from Lake Erie.  Both Fermi 2 and Davis Besse have been plagued by numerous accidents and age related degradation. Fermi 2 Nuclear power plant is the largest GE March 1 design in the world, which is the same design that failed in Fukushima as a result of the earthquake on 3/11/2011.  High Level radioactive waste is piling up on the Western Lake Erie Basin and there is no idea as to what to do with it. A grassroots citizens movement is addressing these issues through organizations like the Toledo Coalition for Safe Energy, Occupy Toledo and the Green Party. The two major political parties are silent on these issues except for outgoing Democratic congressman Dennis Kucinich, who has called for an inspector general's investigation into the cover-up of severe safety issues with the cracking in the shield building at Davis Besse.

It has recently been discovered by Occupy Toledo activists that hundreds of thousands of tons of radioactive drill cuttings from PA fracking wells have been deposited at the Vienna Junction Landfill operated by Republic Services that straddles the border of northwest Ohio and southeast Michigan. This ocurred from Jan to June of 2012. 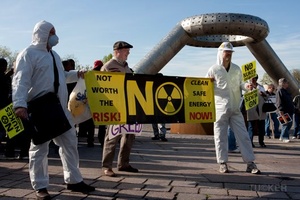 Members of Occupy Toledo and the Toledo Coalition for Safe Energy at the GE Shareholders meeting in Detroit, Michigan. The man in the hat is the people's attorney Terry Lodge.