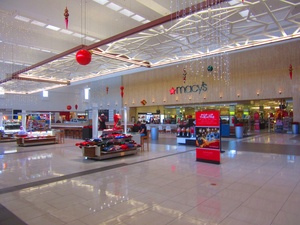 Decorated for Christmas.Southland Center is a regional enclosed shopping center off of Eureka Road between Racho Road and Pardee Road (and exactly halfway between Telegraph Road and Interstate 75) in Taylor, currently owned by Brookfield Properties. First developed as early as 1965 by Shopping Centers Inc., a consortium of Horace Carpenter Jr., Victor Gruen and Louis G. Redstone, it originally opened on July 20, 1970.

The earliest known announcement came in March 1966, when Hudson's purchased a 100-acre parcel at Eureka and Pardee "for the possible future development of a major retail shopping center" with the caption accompanying an included map stating "This one will probably be called 'Southland'."

Originally anchored by Hudson's (which moved from the Lincoln Park Plaza), Kroger and Woolworth, the mall underwent its first expansion in 1976 with the demolition of the Kroger store, extending the east court, and adding JCPenney, dedicated October 6, 1976.  After a mall-wide renovation in 1983, the next alteration would be the addition of Mervyn's at the mall's west end in 1988.  The Picnic In The Garden Food Court (today's Best Buy) would be added in 1992, while a Borders bookstore replaced the old Southland 4 mall theater in August 2000. Beginning in 2001, the Hudson's store was held hostage by a Chicago-based company called Marshall Field's, which itself was removed in favor of the Macy's nameplate in September 2006.

Southland recently completed perhaps its most extensive renovation in 2015, changing the overall look of the inside, while adding a Cinemark Theater to the general area; it having replaced the Mervyn's store. The theater opened on April 21, 2016; between November 2015 and February 2016 a temporary "Pop-Up Theater" was set up in the court in front of the future theater entrance. Three new sit-down restaurants were also part of this project, opening between 2016 and 2018.