Airsoft is a combat simulation recreational past time practiced around the world. Unlike paintball, airsoft focuses on recreating military or law enforcement situations with a strong focus on realism using replica firearms that shoot 6mm plastic BBs. Airsoft was started in Asia and its popularity in countries like Japan, China and Taiwan has much to do with the strict firearms laws in those countries. In recent years airsoft has become increasingly popular in the United States and Europe.

Airsoft guns range from cheap spring-powered guns costing only a few dollars to high-end electric and gas powered guns costing as much as six thousand dollars. Many of these, especially the electric guns, are selective fire guns. As most of these guns are very realistic and designed to look just like the real thing, the tips of the barrels are often painted orange to distinguish them from real firearms. Federal law actually requires these markings on fake guns that are imported or shipped in the US, with some exceptions for law enforcement, movie, and theatrical purposes. California law supposedly prohibits removing the markings required by federal law, but is so ineptly written that it doesn't actually change anything. Still, removing these markings is done at your own risk and generally isn't a wise thing to do.

Even with orange tips, many airsoft guns can easily be mistaken for the real thing. Brandishing a replica firearm is legally equivalent to brandishing the real thing. If you do get into Airsoft, NEVER DISPLAY YOUR AIRSOFT GUNS IN PUBLIC unless they're the type that are made out of clear plastic and obviously identifiable as a toy from a significant distance. When transporting airsoft guns, keep them in a case and out of public view. The added benefit of a case is that they protect your airsoft gun, which are often more fragile than they appear.

Big 5 Sporting Goods carries airsoft guns, but they are of inferior quality, reliability, and are not powerful enough to be competitive in most recreational matches. They're cheap, however, and are perfect for backyard plinking. The next closest airsoft retailer is Airsoft Extreme in Citrus Heights. Used airsoft guns can often be found on the the SacAirsoft forum, Craigslist, Facebook marketplace, and eBay. There are plenty of airsoft retailers on the internet and many people get their guns this way.

If you plan on joining recreational matches or purchasing an airsoft gun, talk with someone already involved in the hobby. They can tell you what you need, what you should look for, and whether or not you're getting a good deal. 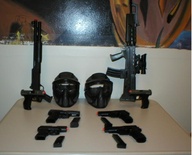 The early collection of guns used by Malcolm Hall. The ones pictured were spring-loaded only. Gas and electric were a bit too hazardous in case of innocent bystanders. Collection grew much larger over time.

It is of debatable legality to discharge airsoft guns in Davis. Municipal code 26.02.060 prohibits the discharge of air guns within city limits, but electric and spring airsoft guns are not air guns under California law. Gas-powered airsoft guns don't actually operate on compressed air, but instead operate by igniting a flammable gas. Thus, they're not air guns, but a prosecutor could argue that they fall under the law prohibiting discharge. This would depend on whether they accept the airsoft gun as an airgun (and airsoft guns have a wide variation), but the real risk by prosecution is putting people and property at risk. Various people at the Davis Police Department are under the impression that the municipal code prohibits firing all airsoft guns within the city, although they are not very clear on whether airsoft guns qualify as airguns. For example, one representative at the DPD, after conference with other employees, stated any projectile powered by air is prohibited, regardless of it's strength, type of material used, or speed. This is extremely vague: Do Nerf guns qualify? Most definitely not. Again, it seems the situation is more important than the actual shooting of airsoft guns. Several police officers have happened upon people playing games (both at three in the morning, and three in the afternoon) and been fine with it. It does not seem from the comments below that anyone has been cited for playing with airsoft guns in Davis.

In the interest of avoiding being cited, you should probably consider shooting an airsoft gun in Davis to be extremely discouraged, and act accordingly. That means that you should (in general) NEVER PLAY (OR DISPLAY) IN PUBLIC. You do not want to risk or threaten damage to either person or property, which is what most people get into trouble for. Play at one of the locations listed below or on other privately owned land outside the city limits. (Although people have played in the smaller, lesser known public parks during the night). You, of course, should have the permission of the landowner or tenant if you're not playing on your own property. One can learn more about the federal laws here.

Where not to play

Schools, parks, and other public spaces.

There are several "airsoft teams" in Davis, or at least people who often group together when playing. If your name is written incorrectly or you want to fix something about your team or add your team, go ahead, that way we know who plays and games can be more easily organized.

WilliamLewis plays with his brother and some friends when he's back in his hometown. Owns an ICS M4 and various low-end springers/electrics. Wants a gas gun.

2005-11-03 21:05:30   If you ask any firearm instructor, or officer of the law, they will tell you that airsoft guns are legally no different from any other type of guns, and just because a cop doesn't put you in jail, doesn't mean that it isn't illegal, maybe he was being nice. Think about it, you need a permit for a slingshot, why not for an airsoft gun? —DanielGonzales

2005-11-03 22:05:32   Kevin Smith is this dude, to clear it all up, who is friends with David "Normie" Hopper. I played airsoft with the both of them a time ago, but they both play, even though Kevin's never played with Breakfast or Ramrod —JohnDudek

2005-11-03 22:14:30   That's BS he told you, Daniel. They're not classified as firearms. If you rob a store with an airsoft gun, they will charge you as if you had a firearm, but on the federal level: they are not illegal. Look up the wikipedia link about the legality part. —ES

2005-11-03 22:52:39   You should all read the Municipal code 26.02.060 before commenting any more, it is very clear about saying that you can not fire any guns, air guns, slingshots or metal tipped arrows without a permit stating when, where, and how many shots. Remember- the cops don't usually care that much, but it should be known that there is a law against it in case they are having a bad day. —DanielGonzales

2005-11-29 18:40:22   I'm interested in finding some new place to play, possibly not where the cops are going to bug us, so if anybody has ideas, please contribute. This is a pressing matter within the airsoft community right now. —JohnDudek

2006-01-18 14:16:23   I was looking at the guns at Big 5, and if you read the warning labels, airsoft guns do not have a "airgun" label, but the gas pistols have a label on the actual gun that says something along the lines of "This is an airgun". I think that should clarify that spring-loaded airsoft guns are NOT air guns. Legal? I say yes! —JohnDudek

2006-02-03 18:55:16   Hey I asked the cops and they said that it is technically illegal, the municipal code prohibiting airguns, firearms, bows, etc. has never been applied to airsoft guns and as long as we use them in a "safe and prudent [careful]" manner the cops probably won't bother us. —AdamPoe

2006-02-20 23:01:10   The question is, what counts as an airsoft gun and what falls under that municipal code? I know spring-loaded guns shouldn't count, but what about gas blowback and electric blowback? Also, I'm wondering if there's a feet-per-second (FPS) limit on what guns are allowed, indicating how fast our guns can shoot, and therefore, how powerful they are. —AlexanderHo

2006-02-20 23:50:02   I'm assuming it's the type of pellet. Any actual "air gun" shoots metal bb's and pellets. Airsoft guns aren't really airguns. They shoot plastic bb's, even if it is gas or electric with blowback. (edit: You do need to be 18 to buy them, in any state). I'm sure the force and velocities of shot matter a whole lot too. I think a lot of that is on their wikipedia page. -ES

2006-03-17 02:50:42   I asked a couple of cops when I was at University Mall one night, and they said that as long as you play away from bystanders so they don't think you're holding real guns, you're pretty much good. —AlexanderHo

2006-10-31 21:55:04   For Halloween 2006, I called the Davis PD to ask them what the rules are concerning AEG and gas blowback airsoft guns in public. The answer was that the gun must have an orange tip, cannot be discharged in the city limits, and cannot be pointed at anyone at any time. They added that anyone can report you, but that the receptionist who answered my call would also answer theirs and could explain the situation to them. So happy airsofting! —LiRic

2007-06-10 01:48:41   So the only thing that strikes me is the environmental issue of Airsoft. How easy/do you recover the plastic BBs? Especially if you're forced to play in obscure outside places so the cops won't bug you, it seems that you could easily litter a field full of plastic rather quickly. —AlexMandel

Answer: Don't use plastic BBs. There are cornstarch BBs that are just as good and they're biodegradable. Unfortunately, you have to buy them online as you can't buy them in Davis.

Good place to play? The public shouldn't be able to see you where you play. Remember, airsoft guns look like the real deal, especially from a distance. You'd still freak people out and bring a law enforcement response upon yourself. Not to mention, the fields are probably private property. —wl

Insofar as people seeing us goes, I figured it would be less likely out there than in the middle of downtown. Good point about the property issues though. —BrendanChan

2021-04-04 14:16:16   Wow the writer of this article should actually do some research. In regards to legalit: "Gas-powered airsoft guns don't actually operate on compressed air, but instead operate by igniting a flammable gas." ROFL Gas airsoft guns DONT Combust, it literally IS just compressed gas —DreadPirateSnuffles