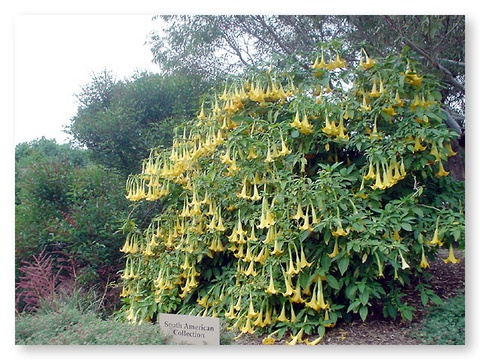 The UC Davis Arboretum has some beautiful Angel's Trumpets.

Angel's Trumpets (Brugmansia sp) are dramatic shrubs bearing large pendulous flowers, typically with a sweet scent. Oftentimes confused with plants of the genus Datura because of their similar trumpet shaped flowers, the two are most immediately differentiated by the shrub or tree form of Brugmansia and its nodding flowers verus the herbaceous, somewhat woody form and typically upward facing flowers of Datura. A member of the nightshade family (Solanaceae), all parts of this narcotic plant are highly toxic and have been used by native cultures in religious ceremonies. One legend says the plant has a fragrance so strong that it can induce sleep in those who inhale the aroma, and that those who sleep under this tree will have strange and erotic dreams. Other names for Brugmansia species include yerba de huaca (Plant of the Tomb), campanilla, maicoa, tonga, toa, buyes, floripondio, chamico, huanco and huacacachu and borrachero.

Angel's Trumpet is a large shrub, but is often pruned in a tree form, much like Crape Myrtle. The plant can grow to twenty feet and has a frost-tolerant root system, so should your Brugmansia die back from a hard frost, give it another season to recover before giving up the ghost. A South American native, Brugmansia typically prefers warm or hot days and cool nights, indigenously growing along the Andean and Pacific fringe of the continent from Colombia down to southern Peru and the middle of Chile. Our Davis and coastal climates allows us to grow some Brugmansia species that cannot be grown elsewhere in the US! Angel's Trumpets do equally as well in shady locations as in direct sun, and perform best in well-drained soil with regular water and feeding. Blooms tend to develop at branch nodes, arrive in flushes, drop off, then repeat the cycle from late spring through early fall. Brugmansia can be most easily propagated by soft- or hardwood cuttings or layering. Sprout them in peat or plantable containers, to reduce transplant shock.

Because they share the same family as peppers, potatoes, and tomatoes, Angel's Trumpets are subject to many of the same insect attacks: whitefly, spider mites, aphids, mealy bugs, thrips, leaf hoppers, tomato hornworms and army worms. Most of these can be controlled with a simple 1:1 spray of alcohol and water with a squirt of dish soap added.

As narcotics, Angel's Trumpets have been said to produce hallucinations and have aphrodisiac effects. Scopolamine is responsible for the powerful hallucinations. South American natives used to drink infusions of Brugmansia leaves and flowers, and also mix its ground seeds into their maize beer. Following is one 19th century account of brug brew:

A traveler in nineteenth-century Peru gives the following description of the effects of such a psychoactive drink on an Indian man who was seen to be: "falling into a heavy stupor, his eyes vacantly fixed on the ground, his mouth convulsively closed and his nostrils dilated. In the course of a quarter of an hour, his eyes began to roll, foam issued from his mouth, and his whole body was agitated by frightful convulsions. After these violent symptoms had passed, a profound sleep followed for several hours' duration and when the subject had recovered, he related the particulars of his visit with his forefathers. He appeared very weak and exhausted." source

The effects of attempting to use Angel's Trumpet as a drug are highly unpredictable and often lead to death. In May of 2005, 4 Florida teens nearly died after trying to get high off the plant.

In addition to religious and recreational uses, Brugmansia species were also used by pre-Conquest Colombians in a tobacco and maize beer concoction to place slaves and wives of dead kings in a deep narcotic state so they could be buried alive with their masters and husbands. Present-day Tzeltal Indians of Mexico smoke the dried leaves of B. suaveolens with Nicotiana rustica to produce visions that indicate the cause of various diseases. The Jivaro Indians of eastern Ecuador and Peru used Brugmansia in an enema decoction taken by warriors 'to gain power and foretell the future'. The plant continues to be valued within South America for its psychoactive properties and ornamental value — cultivation is often supervised by shamans with special knowledge of their botany and pharmacology.