To the joy of many a bicyclist in need, there have been many self-service bicycle repair stations installed around the UC Davis campus and the City of Davis starting in 2010. The Dero Fixit stands include wrenches, screwdrivers, tire levers, and tire pumps attached to the stand for DIY bike repair and maintenance. Using these tools, bicyclists can adjust their brakes and derailleur and fix a flat tire. 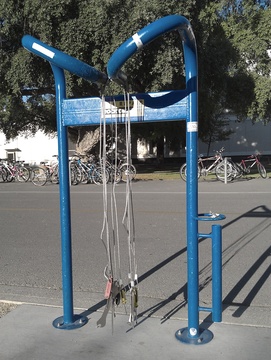 Stand near the Bike Barn

TAPS and Student Housing were responsible for putting the stations in various places around campus. There was an October 2011 article in Dateline publicizing the campus stations.

TAPS has a map of current station locations. As of September 2013, the locations as listed on the map were: 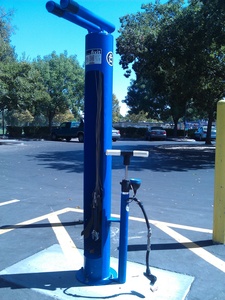 Stand at the Yolo County Library

The Davis Bike Club in cooperation with the City of Davis' Bicycle Advisory Commission installed several stations around town. In May 2012, the Davis Enterprise had an article about the placement of the first two stations.