A flashmob is a group of people (or if viewed negatively, sheeple) who are quietly organized, usually through the help of the Internet or other digital communications, to perform a public act. The act is usually odd or striking and involves many people who may have never met each other before the gathering. To the public, no explanation is given and the mob disperses after performing the act. 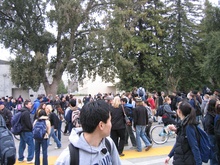 On Thursday, February 1, 2007, a group of people assembled in front of the UC Davis Memorial Union ATM machines and cheered, applauded, and chanted "ATM! ATM! ATM!" The event happened at the strike of noon when the MU bells chimed. The event ended shortly after the chimes stopped, and everyone disbanded.

The UCD Police arrived before the flashmob began. When asked why the officer was there, he responded, "These kids think they can have hundreds of people talking about this on the Internet and have us not know about it. I don't think so." Then the officer yelled at people on the roof above the ATMs through his PA system. The people responded that they work there but the officer could not hear. When told that the people were employees of Campus Unions the officer yelled, "Go to work." When asked what was wrong for people to peacefully gather when no class is in session at lunch hour the officer had no response and, when the bell chimed, made no attempt to intervene.

Many people were left scratching their heads, despite over 1,000 people being involved.

The event was organized by Zack Crockett through Facebook, and over 1,200 people joined the group before the event occurred on Thursday. The event was supposedly one of, if not the, largest flashmobs in the country.

Interestingly enough, Bill Wasik, who organized the first flash mob in Manhattan in May 2003, claimed, according to Wikipedia, that he created flash mobs as a social experiment designed to poke fun at hipsters, and highlight the cultural atmosphere of conformity and of wanting to be an insider or part of "the next big thing." Bill Wasik is a senior editor of Harpers Magazine, where his flash mob article appeared in the March 2006 issue. An online interview with him discusses his motivation.

Coordinated with a bunch of other cities in april 2012. Purported to be the worlds largest (whether this is true or not has yet to be determined).

From May 2012 at the Farmers Market

2007-02-02 11:39:04   Now if only students could get passionate about something more constructive than chanting "ATM ATM ATM." It was amusing, but I wish someone would have captured the police officer I talked to on video or camera... but then again the lack of any animosity toward 'the man' adds to the non-partisanship of this pointless event. —RobRoy

2007-02-02 15:15:54   I heard about this as well, and agree with Rob. I say the next flashmob is organized around a voting booth come November. Maybe then we'd be taken a little more seriously when student leaders try to convince legislators that they have to care about students. —ThomasLloyd

2007-02-02 19:58:18   Why do so many people want the flashmob to be a demonstration? You know why I went to the flashmob and don't go to demonstrations? Because there was no point. Demonstrations, regardless of the cause, are displays of fevered egos and zealotry that drown whatever the message is. BTW, the surest sign of immaturity is the incessant need to act mature. —TravisTaylor

2007-02-04 15:02:06   this was utter stupidity. The Japanese flashmobs were funny because they were tactful and in a sense they were demonstrations because they attacked the conformity of their own culture, which is stereotypically efficient and orderly. And egos are everywhere. Who gets to be in the Guinness Book of World records? Zack Crockett from UC Davis, because we are apparently far superior than any other flashmob host. Also, the guy who created flash mobs, Bill Wasik, according to the holy Wikipedia, "claimed that he created flash mobs as a social experiment designed to poke fun at hipsters, and highlight the cultural atmosphere of conformity and of wanting to be an insider or part of 'the next big thing.'" BTW, the incessant need to call others immature is the surest sign of immaturity. —AliceChoe

2007-02-04 16:21:49   I don't understand the controversey over this. The flashmob was pointless and silly, sure, but so are most. Nobody lost more than a minute of their lives to this, so who cares if it didn't accomplish anything? —GeoffJohnson

2007-02-04 17:38:10   Geoff, I can't speak for others, but my main motivation for arguing about it is the fact that I lead a small, petty life, devoid of true struggle. Everyone else probably has stupid reasons. —TravisTaylor

2007-02-04 23:32:57   I was using "non-partisanship" as a synonym for not standing up for anything. While I attended this event, all the documentation of it, as well as my memory of it, left me unimpressed. And while Zack Crockett posted on Digg.com that he did not intend to get more than 100 people in the flashmob, he called Guinness to come out to put him in the book as organizer of world's largest flashmob. But compared to other flashmobs, like the ones with dancing in metro stations chasing business men, ours lacked much of a point or respectable organization. There were so many people waiting for it to begin (were bystanders included as participants?). Even the police were there. It was not inconspicuous so it could hardly be considered, done in a "flash." While I understand it is a form of performance art I like my art to have more of a point. I think we should try to find out the next time the Preachers with Signs are here, then have a huge crowd circle them while singing, hand in hand, "Kumbaya ONCE, and then disperse.—RobRoy

2007-03-02 22:04:15   I recommend against either really big flashmobs, and those that go into lecture/research buildings, at least during weekday hours. Both of these could probably land people in jail, for blocking normal traffic and misusing private property. It is for these reasons that I support CCCC and Students for an Orwellian Society, because in what has been their main form of communication (Mass Posterings) it is difficult to break any rules or regulations. Then again, college students are free to do as they please and are most likely aware of any possible consequences of their actions (hence this useful site). —LeonardMarque

2007-03-03 17:47:04   RobRoy looses for being a spoilsport, but wins for his idea of Flashmobing the preachers with signs. I would definetly be down for that. —StevenDaubert