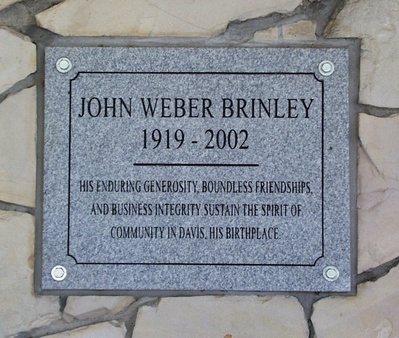 John Weber Brinley (November 4, 1919-November 2, 2002) was a lifelong Davis resident, Realtor, and civic leader. His maternal grandparents, George Augustus and Ann (Hunt) Weber, were early residents of Davisville and established the town's first bar; his parents were "Sam" A. G. Brinley and Gertrude Frances Weber. John was born in Davis, spent most of his life here and donated much to our community during his lifetime.

Brinley graduated from Davis High School in 1937 and went on to spend a year in ROTC at UC Davis before transferring to UC Berkeley. Almost immediately upon his graduation from Berkeley in 1941, John served four years in the US Army. While on leave in 1943, he went on a blind date with his future wife, Laurette Frances Suez; the two married in 1944 and remained together for 51 years, until her death in May 1995. After completing his military service, John Brinley returned to Davis, working at the Bank of Davis for a year before joining his father at Brinley Real Estate & Insurance Company. By the time of A. G. Brinley's death in 1961, Brinley Real Estate had become one of the largest real estate offices in Yolo County, serving Davis, Woodland and Winters. John Brinley led the family real estate office until 1983 when he turned over the business to a family friend and moved into property management.

In 1968, John W. Brinley was honored with Davis' CA Covell Citizen of the Year award in recognition of his boundless philanthropy and committment to community service. In 1969, John Brinley returned the honor by establishing the A. G. Brinley Award in honor of his father, Sam Brinley. Some of John W. Brinley's philanthropic associations include membership in the Yolo County Historical Society and St. James Catholic Church, as well as presidency of the UC Davis Library Associates and the Yolo County Housing Authority. During his 17 year association with the Housing Authority, Brinley helped create low-income housing for county residents, including two farm labor camps. In 2001 Brinley and his son, John Kevin Brinley donated $5,000 worth of stock to the Hattie Weber Museum, named for Brinley's favorite aunt, Harriet Elisha Brinley (1872-1961).

John loved to travel and did so with family members until just months before his death at age 82 after being diagnosed with lung cancer. Brinley left four children, seven grandchildren and one great-grandchild from his marriage with Laurette; today only John Kevin Brinley and his wife remain in Davis. John W. Brinley was interred in the Davis Cemetery next to his wife. Today, the family name lives on in the Brinley Block, the Brinley Building, John Brinley Properties, the Laurette F. Brinley Bench and the A. G. Brinley Award.

A plaque dedicated to John W. Brinley on the building south of E Street Plaza reads:

Below the plaque sits the Laurette F. Brinley Bench