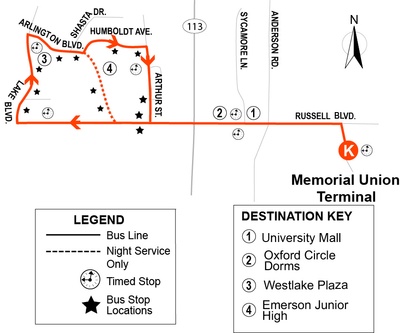 The Unitrans K Bus Line, formerly the D-MU line leaves from the MU Terminal. It serves West Davis along Russell, up Lake Blvd., and down Arlington Blvd. to make a loop. Some Freshmen ride this line to Cuarto. They usually take the C line to get into campus, because the closest stop on the K line inbound is already on the edge of campus.

The K line stops at Arthur Street when leaving campus but does not stop at Arthur when going towards campus. The nearest eastbound stop is on the Q.

As of August 2013, the K bus line no longer serves the Adams Loop during night service.

The weekend K Line runs every hour, on the half-hour from 9:30am to 6:05pm with a 10-minute offset starting after noon. The route follows the regular weekday D Line route. Also starting August 8th, the line will be extending its run to 6:40 pm.

Destinations on the K Line