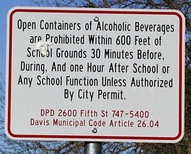 Sign posted on Alice Street If, like most people, you grew up in a community with an open container ordinance, you probably grew up assuming that drinking in public was illegal by default. If you moved to Davis before summer 2002, you may have experienced the pleasant sensation of having that assumption fixed. Lacking such an ordinance, Davisites were free to carry open beverages willy nilly along their sidewalks parks and streets, supping them with a relaxed and civilized air.

This pleasant, mature and dignified state came to an end when Davis City Council, targeting "the problems associated with the consumption of alcoholic beverages in public, including vandalism, violence, litter, trespassing, graffiti and drug activity", passed ordinance 2084 on June 12 2002, while most students were away on summer break. The ordinance created Municipal Code article 26.04, the "open container" article. There may or may not have been evidence offered to council that the article would have the intended anti-badness effect. It's unclear if anyone actually got off their ass and went to the relevant council meetings to find out, proving once again that the world is run by the people who show up. What is certain is that Davis police department had access to all the usual "drunk in public", trespassing, vandalism etc. laws needed to apprehend anyone actually abusing their public freedom before any new ordinance was passed. 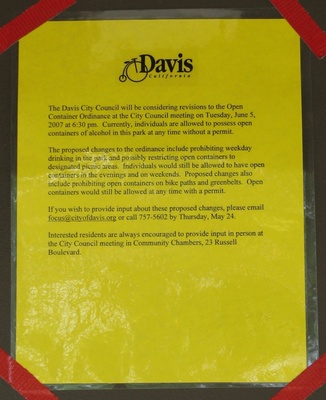 example posting for an update to the ordinance

Periodically, the City Council will agendize the Ordinance to get an update. Unfortunately, the item is scheduled for discussion during the month of June when UCD students are away for the summer. For example, the item appears on the City Council agenda for the June 27, 2006 meeting - 10 days after the end of the Spring quarter at UCD.

T.E. Elliot may have had an opinion.

The original ordinance included a 2 year sunset clause, which was added at the last minute by Councilman Mike Harrington in response to concerns that the ordinance would target unfairly UCD students and the homeless. Harrington felt that having the sunset clause would require the council to keep an eye on the effect of the ordinance and give the community a chance to weigh in on its use periodically. Mike Harrington, who was not endorsed by ASUCD during the 2003 election, lost his bid for re-election in 2003. In 2004 the new Davis City Council, which included ASUCD-endorsed councilmen, Don Saylor and Stephen Souza, ever vigilant, reviewed the expiring bylaw and found that it had succeeded in reducing vandalism, violence, litter etc. They passed ordinance 2159 renewing and revising the open container rule, but without the sunset clause. A user friendly guide to the result is published here (for instance, you are free to have a beer at the farmer's market, as long as they remembered to apply for a permit that week).

Interestingly, article 26.04 does not completely forbid open containers in all public spaces. Rather, "you are allowed to have open containers of alcohol in parks and greenbelts that do not fall into one of the above categories". There are a lot of "above categories", for example the offlimiting of all areas within 600 feet of a public school during or near the times of school functions. Some helpful maps of specific off limits areas are provided. Helpful maps of acceptable areas are not.

The signs that were posted include the phrase "30 minutes before, during, and one hour after school or any school function". How is one to know if a school function is going to start during the next thirty minutes if you are 500 feet away (as the crow flies) from a school? What qualifies as a school function? (anything with students & faculty present) Does a play rehearsal on a Saturday count (yes)?

Is there anyone out there with the time and will to interpret the new rules and create maps of places where Davisites can still enjoy a quiet Sierra Nevada in their public space? If not, the city has a page that includes maps of parks that are within the 600-ft. range of a school.

So I did a bit of research and came up with the Davis No Drinky Map.pdf. I'm not a lawyer, and read the comments for full info — DanVillarreal More detailed map also available.

Do not trust this to be correct. I take no liability if you get cited — KenBloom

This may be a conservative estimate. (Some parks not listed may have very remote reaches that allow open containers).

Moreover, Davis as a progressive and liberal town should be interested in protecting personal freedoms.