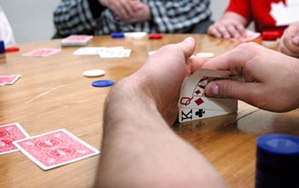 Poker is a classic game dating back locally to the wild west history of California. Playing poker (especially Texas hold 'em) has become more visible and popular recently, possibly due to exposure on ESPN. While it can be played for fun with valueless chips, it is often played for cash or valued chips, either at gambling locations, people's homes or on campus. There are several casinos nearby, and several card rooms over the causeway in Sacramento (see gambling for a list). You can also make the run up to Reno if you want the full neon scene.

At UC Davis, poker playing among students has become so prevalent in the dorms that at one point some freshmen were heard to be losing $50-100 a day in Thompson Hall in Segundo. Since then, flyers were posted mentioning the illegality of gambling, and RAs were told to crack down on students playing poker for money. The poker playing hasn't stopped, though it has become more secretive: most freshmen result in going over to the Cuarto Residence Halls to play. 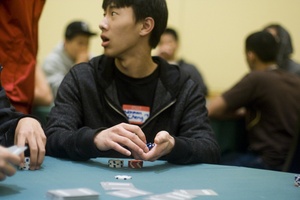 * PokerPalooza is a one day, No-Limit Hold 'Em tournament sponsored by Intramural sports. The most recent tournament was held on January 22nd, 2010, and saw player Jonathan Loyola win it all with Three of Kind, Aces. Prior to that, February 23rd, 2009 saw player Eitan Alfiya win it all with two pair, 6's and 9's.

* The November, 19, 2005 game at the ARC Ballroom was host to approximately 260 players, up from about 150 in 2004. Because this is a one-day tournament, play continues throughout the night until there is a winner. (The 2004 tournament extended until 3 A.M.) Unfortunately, PokerPalooza only occurs once a year. The event is free for undergraduates or $15 for everyone else. Information Sheet for 2005 2005 Rules

* The MU Games Area is hosting a series of seven No Limit Texas Hold ’Em poker tournaments during Winter 2006. The tournament occurs on Tuesday and Thursdays from January to March. More information can be found at http://muga.ucdavis.edu/poker.html 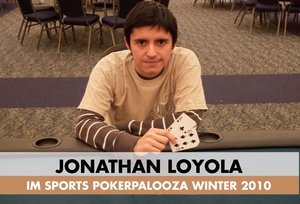 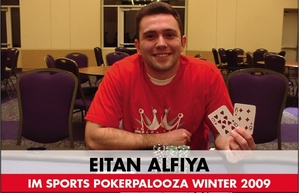 2005-01-26 18:34:00   Poker and other card games where the house has no "bank" aren't illegal in the state of California. You do need a license to collect table fees like an over-18 Poker room does, however. —ScottRitchie

2005-01-26 20:33:49   However, it is important to note that what is permissible on campus is not governed by simple legality, especially when it comes to the Residence Halls. If you are over 21, that doesn't allow you to consume alcohol on campus, for example. Similarly, Gambling is normally not permitted on University grounds. —ElvinLee

2006-08-07 11:32:53   These comments are untrue. I was very close with the host of these games. The Cuarto and Segundo games were hosted by the same person. We will be starting games up soon if anyone is interested. —MarkBuckalew

2010-02-09 01:37:33   Anyone have any information on the policy of using MOObileNet for online poker? Seems like important information for students who might want to avoid getting their wireless privileges revoked (*innocent whistling*). —hankim