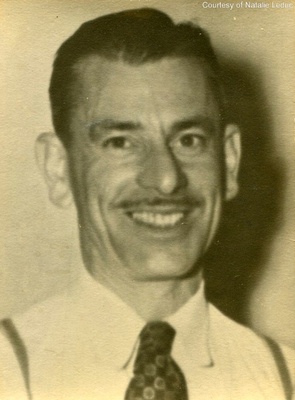 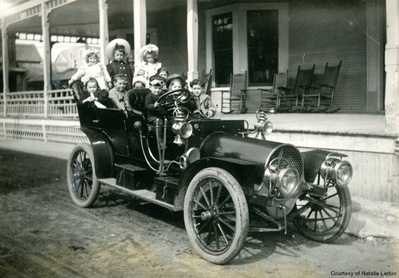 A. Douglas Bombard, 1909, age 5, on the Main Street bridge, with the Riverside Inn in the background. The car was his father's, reputed to be the first car garaged in Saranac Lake. Among the children on board are Agnes Corbett Kilroy, Bertha Utting Smith, and Louise Downing. See the Gray-Bellows Motor Company. 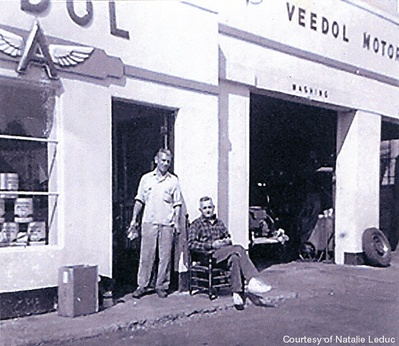 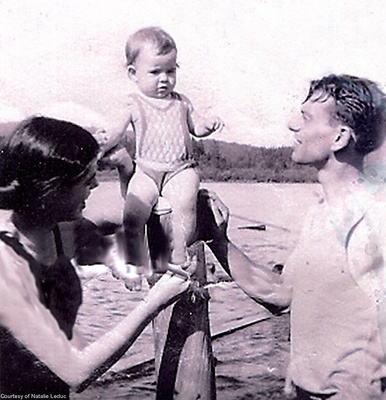 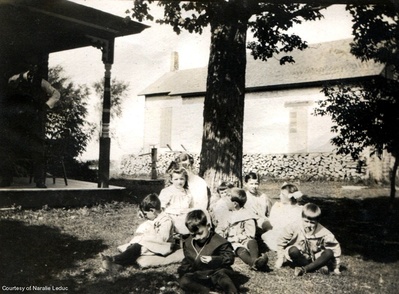 Doug Bombard and the Crawford girls

A. Douglas Bombard was the son of livery man Giles Bombard. He became a surveyor, working with E. M. Merrill. He also operated a garage on the Church Street Extension. He lived at 110 River Street from 1936 to 1939, and at 7 Maple Hill Road from 1945 until his death.

He drowned in Lower Saranac Lake at age 45, when the car he was riding in with Dr. Charles H. Haskins fell through the ice on January 19, 1949.

Dr. Charles H. Haskins and Justice of the Peace Alfred Douglas Bombard, of Saranac Lake, were drowned in the icy waters of Lower Saranac Lake on Tuesday night. The two men were driving across the lake in a car to the Haskins camp across the water. The ice was only about an inch and a half thick at the point where car plunged through. The bodies were found Wednedsay afternoon.

Mr. Bombard was a son of Mrs. Edith (Crawford) Bombard and the late Giles A. Bombard, of Saranac Lake, and a nephew of Mrs. Ella Douglas, of Chateaugay. He was 44 years of age.