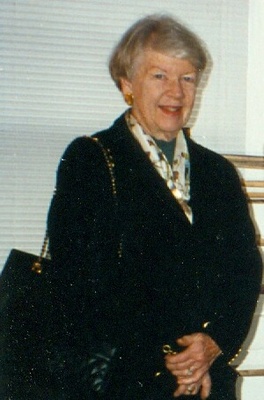 "With a song in my heart"

Anne was born March 9, 1916, in New York City, the daughter of Oscar F., and Loula W. Williams. She spent her childhood in Scarsdale, N.Y., and was educated at the Masters School, Dobbs Ferry, N.Y., and at Sweetbriar College, Virginia.

She caught Roger Tubby's eye in Peru, Vermont, at Old Home Day. After only six dates, she accepted his marriage proposal. After a six month "working" honeymoon in Mexico, they settled in Vermont.

During the war they moved to the Washington area, where Anne served as a member of the League of Women Voters, a volunteer at Planned Parenthood, and a Girl Scout leader and trainer.

In 1953, they moved to Saranac Lake, where they bought the Adirondack Daily Enterprise with Ellen and Jim Loeb and set down the deep roots that would tie them to this community for the rest of their lives.

In the sixties, when Roger served under three presidents, they lived in Washington, D.C., and in Geneva Switzerland.

While Roger served as Ambassador to the United Nations in Geneva, Anne relished her role as hostess to world leaders. They returned to Saranac Lake in 1972.

During her fifty years in Saranac Lake, she was active with the Village Improvement Society, and helped establish the River Walk and Beaver Park. She volunteered for the March of Dimes and the Downtown Action Committee, among other efforts.

For many years she was active on the hospital board and co-chaired its benefit Antiques Show. She served as the library's board president and is on its permanent Honor Roll.

She was a member of the Essex County Garden Club and of St. Luke's Episcopal Church, for whose Budget Box she volunteered regularly. Recently she also delighted in her role as hostess on the Adirondack Scenic Railroad.

Gracious always, she loved learning and gave of herself generously to any community of which she was a part. Anne loved gardening, considering herself enthusiastic rather than skilled, and she made a welcoming home wherever she was, whether in an ambassadorial residence or in her beloved small camp on Lake Kiwassa. Travel, too, was a continuing passion of hers. But among all her travels and gardening and community service, Anne especially enjoyed her family and its lively gatherings.

She is survived by four children, Dr. Suzanne Tubby Batra of Greenbelt, Md., and Saranac Lake, Jean Prentiss Weiss of Brunswick, Maine, Roger Peter Tubby of Washington, D.C., and Brenda Tubby Chandler of Portland, Maine; and by grandchildren and great-grandchildren.

There will be a graveside service for family at Harrietstown Cemetery at 11 a.m. on Wednesday, June 5, 2002, to which close personal friends are welcome. An open gathering will follow at noon at the Cantwell Room at the Saranac Lake Free Library.

Memorial gifts may be made to High Peaks Hospice or to the charity of your choice.

Fortune-Keough Funeral Home, Inc., is in charge of arrangements.

Anne Tubby remembered that, as a very young woman, she was given the job of clearing out the insurance office of Charles Ives, better known as a composer.