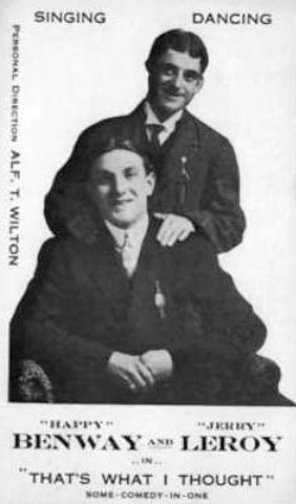 Adolph Pierre Benoit, Jr., known by his stage name, Happy Benway, was a vaudeville star who came to Saranac Lake for the cure in the late 1920s.

Happy Benway, "The Old Minstrelman," died this morning at 8:25 at Will Rogers Memorial Hospital at the age of 73. Even during his long illness, he came to the hospital in February 1928, he remained a grand old showman.

And in 1958, though he was much enfeebled, he directed one of the best Saranac Lake Rotary shows of all time, getting an able assist from Jack Roosa.

Happy's real name was Adolph Pierre Benoit, Jr. His stage name was given him by the late Dr. J. H. Barry, manager of the Kickapoo Indian Medicine Show during the 1900. season when Happy was fifteen. Happy had been born in Warren, Mass.

From 1900 to 1906 he played with several medicine shows and then became principal comedian with the Guy Brothers Minstrels. Later he played with such famous outfits as the Neil O'Brien Minstrels and the Seven Honey Boys and he appeared in cities all over the United States, playing on the Keith-Albee Circuit, the Orpheum, Loew, and many other circuits as well. He toured Canada and England.

In 1920 while on vaudeville in his own act he appeared on the same program with Benny Ressler and Ernie Burnett, both now of Saranac Lake.

Happy was stricken with tuberculosis in 1928 and after coming to Saranac Lake helped to produce shows for the Elks, Odd Fellows, Jewish Center, Knights of Columbus, the Masons, the Moose and for local churches. He also wrote a regular column for Variety, the theatrical trade magazine.

Though laid low by his illness, he made people who visited him share in his exuberance and joy in life. He was the oldest of the "pros" at Will Rogers, and one who gave the institution a special character. For him, and others like him, the movie and theatrical industries have given generously over the years. It can be said that Happy Benway helped "make" Will Rogers hospital what it is today, not only by his community service, but by his observations appearing in Variety.

One of the great comics of vaudeville days, Happy Benway, is directing the star-studded Saranac Lake Rotary Club show this year. The show will be presented Friday, Feb. 7, the Winter Carnival weekend.

Local comedians are visiting Happy to go over their lines, lines that he has written and some of which he used himself. Happy is a patient at Will Rogers Memorial Hospital and, although he is not too well, he has attended one rehearsal and will attend others.

Happy Benway has performed in every major city in the United States and in many cities of Europe. He got started on the stage in 1904 at Southbridge, Mass., where he was visiting his grandmother. There he won an amateur prize and went to work for the Kinkapoo [sic: Kickapoo] Medicine Company at $8 a week.With a ready wit and an engaging personality, Happy became a success in vaudeville, chiefly as a blackface comedian. He was with the Guy Brothers Minstrel Company, Neil O'Brien, the Honey Boy Minstrels, and in the 1920s he had his own acts, Benway-Flournoy and Benway-Mulroy. Then one day In Minneapolis he hemorrhaged with tuberculosis and four weeks later at Hannibal, Mo., he had a second break-down and came to Saranac Lake. He has been here ever since, for twelve years at cure cottages in the village and since then at Will Rogers, the hospital that cares for theatrical folk. As might be expected, Happy has many pictures and playbills in his room and other souvenirs of his days before the footlights. He notes without a trace of bitterness that at his peak he made $450 a week and that today as much as $2,000 has been paid for one commercial on TV and $250,000 for five jingles for TV.

Happy says the Rotary show "looks good." He directed a rehearsal Thursday night at the Pontiac theater. He says Jack Roosa is really the director, but Jack, who himself has had an outstanding musical career on the stage, maintains that he is only helping out. Mr. Roosa is proprietor of the Lake Clear Inn.

Dr. Henry Leetch is to be interlocutor. The six comedians who will do three sidewalk gag routines and other bits, are Tom Cantwell, Ez Sears, John Pedroni, Walter McGovern, Phil Wolff and Bruce Elmore. Cantwell, Pedroni and Elmore will do three singing solos.  Songs by the Paul Smith's College Glee Club of 24 members, two dancing acts by Mrs. Dorothy Sargent's girls, a dancing solo by Kay Shuber, solos by Mrs. Ann Trumbull and Mrs. Charlotte Roosa, and songs by an AMA Academy "Egghead Quartet" will round out the program.

Mrs. Trumbull and Mrs. Roosa, incidentally, both have been professional singers, the former on radio and TV and the latter on Broadway in several shows. Andrews Lang and Dick Rawdon are organizing the AMA quartet.

Proceeds of the Rotary show as in other years will go to the club's scholarship fund and to the dental fund to help those children who could not otherwise get adequate treatment for their teeth.

Harold Rodner visiting the Will Rogers, mitting [sic] and candying each inmate.

Otto Kruse, who's ozoning at the Erkander Cottage, ogled by his frau, Lotte Lehmann, the opera singer.

Elmira Fuller and Jean Ryan, both from New York, are newcomers at the Rogers, for observation.

Mrs. William Morris gifted each of her 'children' for Xmas.

Rose Hoenig, who ozoned for so long, left for home okay.