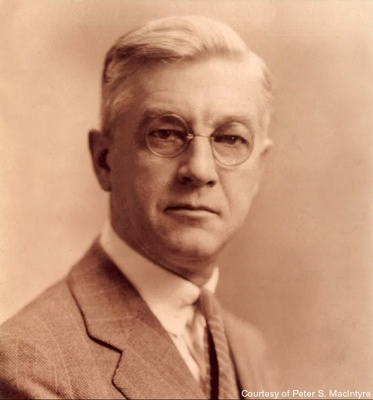 Homer Lazelle Sampson was a patient who became director of the X-ray laboratory at Trudeau Sanatorium, which handled thousands of plates a year. As X-ray technology was being developed, he was learning how to use it, and he became an expert reader of the plates, called a "roentgenologist." Though he had no formal medical training, he was awarded an honorary Ph.D. in Science from St. Lawrence University in 1934. The Adirondack Room in the Saranac Lake Free Library displays a sculpted bust of Sampson, and his doctoral hood.

He was active in scouting.

Homer L. Sampson was staying at Spring Rock Cottage, to which he had come from N.Y. City with incipient tuberculosis. He was age 30 and married. 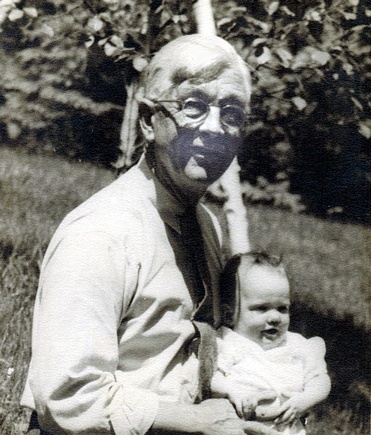 Homer Sampson and grand-daughter Barbara Ann MacIntyre
Courtesy of Peter MacIntyre
Dr. Homer L. Sampson of Trudeau, one of the country's leading roentgenologlsts, died suddenly at 3:30 o'clock this morning in the Physician's Hospital in Plattsburgh where he had undergone a recent operation.

Dr. Sampson entered the Plattsburgh hospital last week and his condition had been reported "satisfactory." His body will be brought back to Saranac Lake today when arrangements for funeral services will be made.

Dr. Sampson rose to eminence in the field of X-ray by overcoming his own misfortune.

Stricken with pulmonary tuberculosis at the age of 30 and forced to forsake a position in the business world, he almost immediately launched a new career in 1910, a year which found Sampson a patient at the Adirondack cottage sanatorium at Saranac Lake.

His new career was climaxed with appointment—although he never had received formal medical school education—as director of the X-ray laboratory at Trudeau sanatorium, famed as a pioneer institution in the treatment of tuberculosis which had been known as the Adirondack cottage sanatorium when Sampson arrived in 1910.

In the 30 years between 1912 and 1942 the Trudeau laboratory under Dr. Sampson's direction examined and wrote interpretations on upwards of 400,000 X-ray plates and films and in the early 1940's was handling X-rays—most of them of industrial workers— at the rate of 20,000 annually.

Dr. Sampson was born April 4, 1880 on New York city's west side and resided there until he was 21 years old. He attended public school on the west side and at the age of 12 left school to become a $2-a-week cash boy in a mercantile house on lower Broadway.

He remained with the mercantile firm about 18 years, working last as a traveling salesman for the concern. During that time his hobbies were photography and a study of electricity, both of which later proved useful in his career as an X-ray specialist.

On July 17, 1910 Dr. Sampson came to the Adirondack cottage sanatorium after doctors told him he had tuberculosis.

"The diagnosis," Dr. Sampson recalled later, "proved my salvation for it virtually started me upon a journey into one of the most fascinating fields of science." 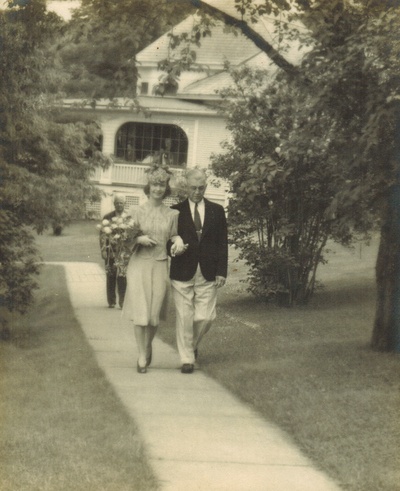 Homer Sampson and daughter, Mary Elizabeth at her wedding at the Trudeau Chapel. Courtesy of Peter MacIntyreDescribing his life in the Saranac Lake institution, Dr. Sampson later wrote: "It was not long before I obtained a position in the workshop as an instructor in photography. Left to my own devices, I utilized my spare moments in brushing up on my old hobby of photography.

"Early in 1912, I heard that the sanatorium had installed an X-ray machine. I had a vague idea of what that was, having been examined with one before coming to the mountains."

Dr. Sampson's diligent effort and intensive self-education soon reaped recognition. In 1914, he wrote (in collaboration with another Saranac Lake tuberculosis specialist, Dr. Fred H. Heise) his first paper for a medical journal. The paper, on the use of X-rays in pulmonary tuberculosis, appeared in "Interstate Medicine" and was the first of many scientific articles by Sampson to come later.

In collaboration with the late Dr. Lawrason Brown, he wrote a book, The Diagnosis and Treatment of Intestinal Tuberculosis, and many of Sampson's studies were presented before scientific organizations including the National Tuberculosis association, the American Roentgen-Ray society, the American Trudeau society, the New York State Medical society and the New York and Pennsylvania tuberculosis associations.

Moreover, recognition came in other ways. He received an honorary Doctor of Science degree from St. Lawrence university, Canton, in 1934 for his work in the field of roentgenology. His appointments included those of consultant in the Radiology department at the University of Rochester, consulting roentgenologist at St. Joseph's hospital, Ogdensburg, member of the medical committee for the study of medical control of silicosis, Department of Labor, Washington, D. C., and a similar appointment to the sub-medical committee for' the study and control of silicosis in New York State.

In addition to his position as roentgenologist at Trudeau sanatorium and for the Trudeau Foundation, Dr. Sampson was a member of the National Tuberculosis association, the American Trudeau society and the Saranac Lake Medical society.

By 1942, the Trudeau X-ray laboratory under Sampson maintained a staff of 14 persons. Five of these were field workers making X-ray surveys and sending films to the laboratory for analysis.

During the eight years prior to 1942, the laboratory examined some 125,000 films of industrial workers alone in an effort to combat silicosis as well as tuberculosis. The films were taken of workers in the "dusty" trades such as iron and lead miners, cement workers and workers in asbestos and glass factories. 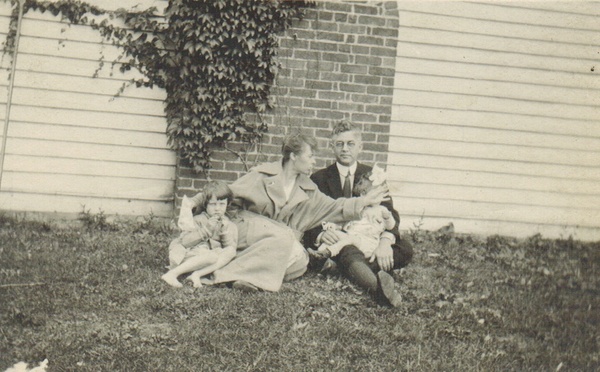 The Radiographer's Cottage at Trudeau Sanatorium was staff housing provided for him. On a tour of the sanatorium grounds in the 1980s, his daughter Mary MacIntyre identified a "shack" beside the house — probably once used for patients in summer (or perhaps for her father) — as her playhouse. It has since been torn down.

Dr. Homer Sampson has returned to his home at Trudeau from Glens Falls and other towns in that vicinity where he has been spending a few days on business.

"Homer passed before my birth (1947), but I have many memories of Trudeau in the 50’s – movies at the rec hall, get togethers in the dining hall. As the son of Mary I had access to many of the buildings. I often visited my grandfather’s former lab. I believe Tommy Rooney (a lab tech and close family friend) had an office there. In particular I recall a full skeleton standing in a corner that even had a nickname (lost to me now) – shelves of lungs in glass containers that I believe were the same that found a home in Uncle Tommy’s lab on Church St. where Trudeau sort of ended up after AMA. Mom also worked there as a stenographer."

As a very young man, he was a traveling postcard salesman who may have taken the photos used in the postcards he sold. This interest in photography led to his career as a radiologist. I have no clue as to how this remarkable transition occurred. His title “Dr.” was from an honorary PhD bestowed by St. Lawrence University. He became one of the world’s leading readers of x-rays of the lungs. In his later years he was often one called upon for expert testimony in brown/black lung court cases. There is a very brief file on him in the Adk. Room at the library. I looked at it not long ago. In it there is a study wherein the basis for his conclusions came from the reading of an incredible number (tens of thousands?) of x-rays.

Homer, was a salesman for silk cravats. He would go to stores with samples of the silk and then get orders for cravats to be made up in the type of silk chosen. Mom remembered playing with the samples in a suitcase that was left from Homer's salesman days.

I think we all agree that it was the photography hobby that led to Homer's interest and later proficiency in the reading of the X-ray films. Mom used to say that he could tell you the patient's name just from the Xray, since he studied them so closely.

Homer also did some work in the silver craft room that was at Trudeau for patients to occupy themselves during recovery from TB. As you may know, he did have the disease himself, contracted in NY City while he was working there, and that is why he and Selinia came to Saranac Lake.

I was told that Homer was a Deacon in the Presbyterian Church in Saranac Lake. Mom said he enjoyed the sport of curling and we often wondered what became of his curling stone.