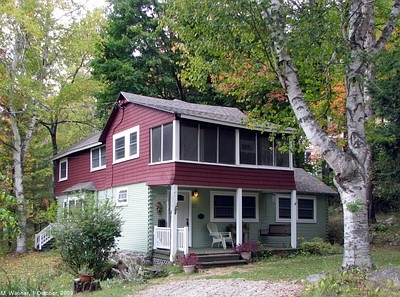 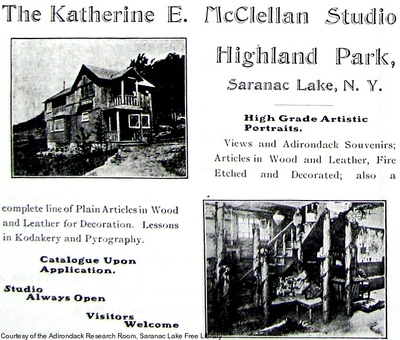 Advertisement for the Katherine McClellan Studio in the 1903 Village directory. Born: August 19, 1859 in Paterson, New Jersey, a daughter of Ezra S. McClellan and Catherine Kinsell 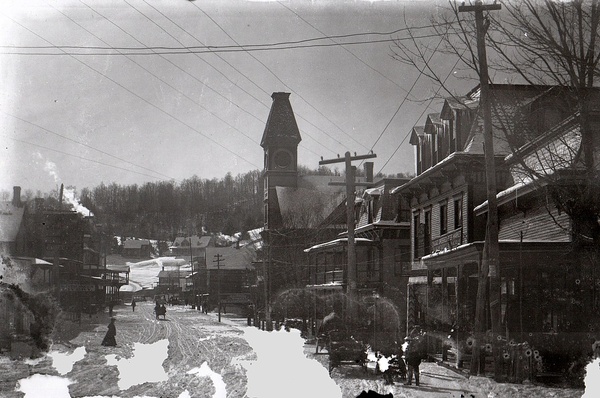 Looking south on Main Street toward the original Harrietstown Hall, undated.  Likely Katherine McClellan.
To the right of the town hall are Little Joe's (then Sherrill's Grocery), the Donaldson Block and the Post Office Pharmacy (then Central Grocery).  See #NoteKatherine Elizabeth McClellan was a pioneer woman photographer who began her career in the Adirondacks. 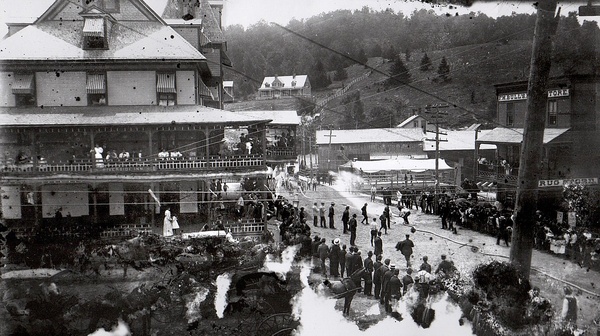 Crowd in front of the Riverside Inn (left), F. M. Bull's Drugs (right).  It appears that firemen are engaged in a contest at the old Main Street bridge, Maple Hill behind (undated, See #note)Katherine Elizabeth McClellan was a native of New Jersey, the daughter of Dr. Ezra S. and Catherine McClellan. She pursued her career in professional photography soon after her graduation from Smith College in Northhampton, Massachusetts in 1882. Her favorite subject was the scenery of the Adirondacks, though she also produced fine portraits. Her studio was at the corner of Old Military Road and Park Avenue. While living in the Adirondacks, she produced artistic booklets of views of Keene Valley and of the John Brown Farm in North Elba. She later returned to Massachusetts, where she had attended Smith College, set up a studio there and became the college's official photographer. She took iconic portraits of such famous visitors as Henry James.

The following story appeared in the Adirondack Daily Enterprise on September 19, 1945 under the headline Saranac Girl Hid Bodies of 10 Men Sent by Stranger.

"In 1899, a large but ordinary trunk arrived in Saranac Lake village at the home of Miss Katherine E. McClellan. It contained the bodies of eight men killed at Harper's Ferry 43 years before." 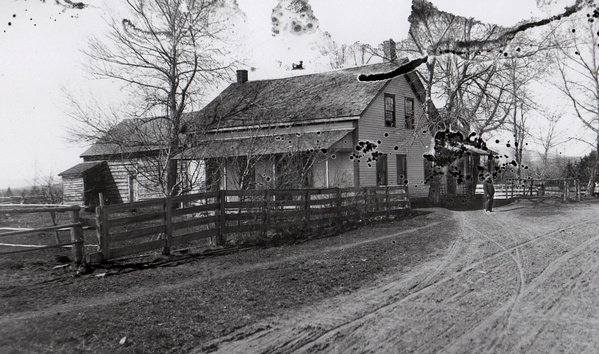 An unidentified farm.  Undated.  (See Note)At the time, Miss McClellan operated a photo studio and was well known for her pictures of Adirondack scenery. She was also known at the John Brown farm in Lake Placid because she sold illustrated sketches there that she had done of Brown.

"It was this association with the place that led to her receiving a letter from a stranger, who revealed to her his rather startling plan to exhume the bones of several of John Brown's followers and have them brought to North Elba to be buried beside their leader."

Bloomingdale's Episcopal Church of the Redeemer.  This negative was especially damaged, and some of the damage has been removed.  (See Note)
The stranger was Dr. Thomas Featherstonhaugh of Washington, D.C,. who begged Miss McClellan and finally convinced her to help him carry out the scheme. He said he could not leave Washington. Miss McClellan apparently later had grave misgivings about what she was getting involved in as the Enterprise story related: "She worked with a constant fear of discovery and interference of the authorities". The bodies had been taken from the grave without the knowledge or consent of anyone except for the owner of the land where they were buried.

"Of the twenty-two men who took part in the Harper's Ferry attack, seven were captured and hanged, five escaped, and ten were killed. Two of the bodies in the last group were given to a medical college for dissection."

Then a man in Massachusetts asked if they would take the bones of two of his relatives who had been caught and hanged as an outcome of the raid and had been buried in Perth Amboy, New Jersey— Dr. Featherstonhaugh agreed to take them. So the bones were sent along to be added to the trunk, making the total of ten. They felt certain of the identity of the remains, as they found one James Mansfield of Harper's Ferry who had been paid five dollars to bury them; he was hired to dig them up again in July, 1899. They had been buried in two large boxes on the banks of the Shenandoah River a short distance from Harper's Ferry. Much of the clothing had been preserved, including blanket shawls in which they had fought that had been given to them as gifts a few days before the raid.

A Professor Libby of the University of Wisconsin, a friend of Dr. Featherstonhaugh's, accompanied the remains to Saranac Lake. Then "Miss McClellan hid the bodies in her house on Old Military Road during the entire month of August. The exact house has not been determined, as Miss McClellan owned three houses on that street. During this period she persuaded the Town of North Elba to furnish a handsome casket in which the bones of all ten men were eventually placed. The men were buried on August 30, 1899 — the final episode in a story begun at Harper's Ferry nearly a half century ago."

The story was retold by Howard Riley in his column of Saturday, March 28, 2009, from which this account was taken.

A six-page article on Katherine Elizabeth McClellan, titled "Straight Shooter," appeared in the July/August 1993 issue of Adirondack Life. The  author, Elizabeth Folwell, notes that McClellan's glass-plate negatives and prints are preserved at Smith College Archives and Historic Northampton, both in Northampton, Massachusetts; Clinton County Historical Society, in Plattsburgh; and the Adirondack Collection, at the Saranac Lake Free Library.

An early view of Bloomingdale.  At left, across the  dark course of the Sumner Brook stands Bloomingdale United Methodist Church.  Undated, but before 1903.  (See #note).

Note: The five photographs above are from a collection of glass plate negatives donated to Historic Saranac Lake by George and Julie Outcalt. The collection was transferred to the Adirondack Room at the Saranac Lake Free Library for preservation and are currently housed within their collection. The negatives were attributed to Katherine McClellan for the following reasons:

1.)   Location. the plates were found in the crawl space under a cabin or small house known to have been owned by the McClellan Family.

2.)   Content. One large-format plate (11x14) is signed "McClellan" along the bottom edge.  One of the plates shows a view of McClellan's pole-log house and studio in Saranac Lake --- not a common subject of photographers as it is not in the center of town.

3.)   Format.  The size of the plates is not consistent with those used by other known photographs of the period --- Baldwin, etc.

Almost all the plates have been damaged by dampness and paper adhesion.  Attribution is by Mary B. Hotaling, researcher and former Executive Director of Historic Saranac Lake, and by Barbara Parnass, photographer.  The full collection of glass plate negatives can be accessed at the Saranac Lake Free Library.

Miss Katherine E. McClellan, daughter of the late Dr. E. S. McClellan of Saranac Lake, will hold an exhibition and sale of old Spanish laces, quaint oriental jewelry, and unusual European garments at the Kismet Shop, opposite the Hotel Marcy, on September 4 and 5.

Miss McClellan, who is a graduate of Smith college, was formerly a resident of Northampton, Mass., but now makes her home in Sarasota, Fla. For twenty years she was a professional photographer. All the objects in the sale are said to be from her own private collection.

Photographs from the Smith College Archives 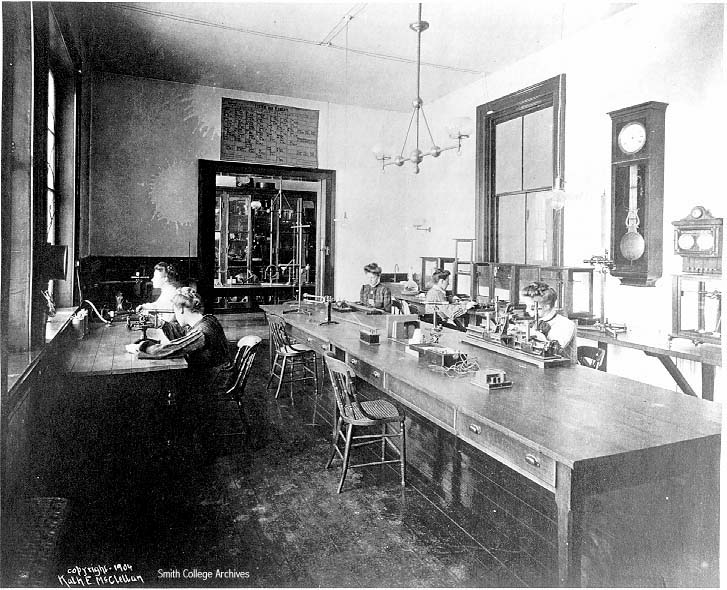 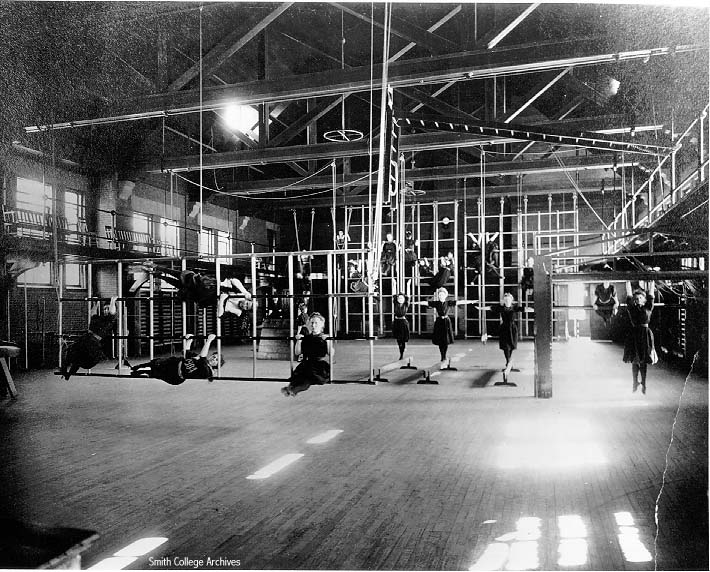