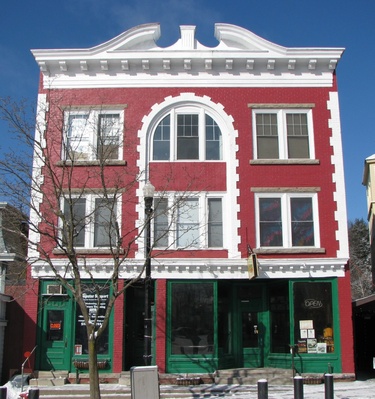 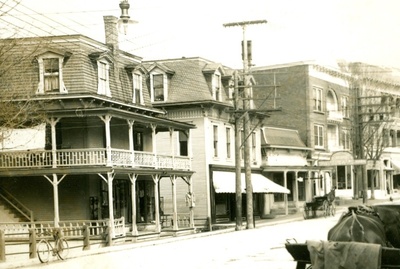 54-58 Main Street, before its balconies were enclosed, stands fourth from the left in this early, but undated, photograph. Courtesy of John Van Anden.

Elizabeth Northrop in the 1927 Canaras.

Other names: China Jade restaurant and Belleville and Associates insurance (2017)

In the 1870s and 80s, Milo and Kate Miller sold approximately one acre from the northern part of their Main St. holdings to two men whose surname was Reynolds. Ransom Reynolds purchased the southern 7/10 acre in August, 1872, for $350; and in November, 1881, Reuben R. Reynolds paid $297 for the northern 1/4 acre. These adjacent lots ran from the middle of Main St. to the east bank of the Saranac River and, eventually, became the site of the group of brick buildings at the center of the arc of Main Street's west wall. Those buildings, numbers 56, 60, 68, and 70, have a story that intriguingly intermingles the lives of photographers, architects, bankers, and the Adirondacks’ most famous historian.

THE DONALDSON BLOCK Not quite a year after her purchase, Anna Brown paid up $900 of her mortgage for release of a 35 foot wide strip from the south side of her land. Within two weeks, she had sold it for $2500 to George W. and Mary Baldwin who immediately turned it over to Alfred Lee Donaldson for the same amount. The transfer was recorded October 23, 1900.

For the sake of perspective, it should be noted that a mere 33 years earlier, Lucius Evans paid Orlando Blood $100 for a full acre directly across the street from Donaldson's 35 x 277 foot slice, and people came from miles around just to ogle Evans' stupendously expensive lot.

Alfred L. Donaldson was born in New York City in 1866. As the of a wealthy, banking family it was hoped he would go to Yale; but he seemed to be more interested in making music than making money. Instead of going to Yale, he went to Europe to study violin. While abroad he met, among others, a man named Richard Wagner and a young woman named Marie Saussenthaler. (see the Haase Block)

The former name, of course, needs no further elaboration. As for the latter person, she was the talented daughter of a St. Louis family whose means were derived from the brewing of beer. She had graduated from the Beethoven School in her home city and had gone to study in Paris and Vienna on her way to becoming a concert violinist.

The two violin students had much in common and became friends; but Donaldson returned to New York and Marie to St. Louis, he to try to live up to parental expectations in the banking business and she with the boy next door who had followed her to the Continent to become her husband. Their paths, though, would join again.

Donaldson had never been robustly healthy. Back in Manhattan, carrying the burden of family pressure and engaging in work that gave him little, if any, spiritual satisfaction, he suffered a general physical breakdown. Following a scenario so often and tragically repeated in those times, Donaldson was found to have contracted tuberculosis.

He arrived in Saranac Lake in February of 1895. He would spend the rest of his life here — nearly 30 years.

A mere two years after coming under the care of Dr. E. L. Trudeau, Donaldson was back in the banking business — this time by his own choice. At the time, Saranac Lake had no nationally accredited commercial bank; so Donaldson, with two other banker-health seekers, founded the village's first, the Adirondack National Bank, in 1897.

In 1901, Donaldson published a book titled Songs of My Violin (G.P. Putnam's Sons, New York), a brief work the chief feature of which is an octet of poems — a quartet of pairs, one for the "spirit" and one for the "song" of each string of the violin, to which the author had ascribed a color according to the character of its tonal quality. Each of these poems was preceded by a bar or two from one of Wagner's operas. The idea was a fine one, but, unfortunately, his poetic ability was not a match for it, and the book did not sell.

The following year Donaldson married Elizabeth Hollingsworth. They had met as fellow convalescents who shared passionate interest in music, and the strength of their bond in a large measure gave strength to their health, though he remained the more delicate of the two.

In 1910, having long been vitally and busily involved in the growth of the village, Donaldson suffered a relapse and was forced to "retire". It was to be a very odd sort of retirement. Not long after its inception, a friend, author Stephen Chalmers, came to Donaldson with a problem and a suggestion.

Chalmers had needed some information about the area's past, had gone to the local library, and had been told that, though sorely needed, there was no source book on Adirondack history. That was Chalmers' problem. His suggestion was that Donaldson should write one.

Though he did not make an effusive show of it, Donaldson liked the idea enough to spend the next decade gathering material for and writing his two-volume History of the Adirondacks (Century Co., New York). Published in 1921, it is, to this day, the only thorough, general history for a region larger than the State of New Jersey and with a rich heritage indeed. Alfred Donaldson died in November 1923.

Probably before the end of 1901, Donaldson erected the building called the "Donaldson Block" at 56 Main St. As far as is known, the first occupants of its two storefronts were the Western Union Telegraph and Cable Co. and George Baldwin, photographer.

The rich visual record that exists of Saranac Lake during its period of greatest growth and prosperity is mainly the result of the work of three men: Baldwin, William L. Distin, and William F. Kollecker. Plates and prints by these photographers form a priceless part of the Saranac Lake Free Library's Adirondack Collection.

In 1898, William L. Distin and family moved to Saranac Lake from Montreal and took up residence in the Donaldson Block, probably on the third floor, front, soon after the building was completed. He went into partnership with Baldwin and they worked out of the shop and studio downstairs in the north storefront. After a few years, Baldwin left to work in Lake Placid and Distin absorbed his business and acquired at least some of his glass plate negatives.

Distin bought 56 Main for $12,500 from Donaldson in August, 1908. This was the year after his son, William G. Distin, Sr., returned to Saranac Lake as a Columbia University graduate.

A photographer like his father, younger Bill had studied architecture at Columbia and acquired a position with the Saranac Lake firm of Coulter and Westhoff . With the passage of time both Coulter and Westhoff bowed out and Distin's name went to the top of the shingle. It also went to the top in a more important way. In quantity of work and consistency of quality, Distin was unsurpassed among Adirondack architects, and perhaps only his mentor, William Coulter, possessed a more elegant architectural imagination.

William L. Distin sold the Donaldson Block to Walter P. Jenkins in June, 1922. Walter and his brother Charles owned the Jenkins' Farm, a very large parcel of land west of the downtown part of the village. Charles had control of the westerly part of this land and Walter the easterly part, closer to the business district. Although both farmed it to a certain degree (Walter raised cabbages at the location of the Petrova Avenue athletic fields), the Jenkins seemed mainly interested in selling the farm lot by lot — especially Walter. In fact, Walter Jenkins made one hundred real estate sales from 1920 to 1938.

Unfortunately, Mr. Jenkins was not as good at holding onto his returns as he was at selling his land. He eventually became hopelessly entangled in debts. In November, 1937, the ownership of 56 Main St, changed from Walter Jenkins to the Saranac Lake National Bank. By then Mr. Jenkins was living in Monterey County, California, but his name lives on in the village as Jenkins Street, located off Lake Street on the old Jenkins Farm property.

Ironically, less than a year after acquiring the Donaldson Block, the Saranac Lake National Bank went bankrupt trying to finance the new highway to Tupper Lake; and the Federal Deposit Insurance Corporation took custody of the building in October, 1938.

In September, 1943, F.D.I.C. sold 56 Main St. to Rex A. Holmes, a lawyer, who went into partnership the next year with Clifford McCormick. After Holmes' death, McCormick worked with a variety of partners and, after having practiced law from his second floor office for 34 years, he sold the building (as McLapbrook, Inc.) to Nancy Pandolfo in October of 1980.

The Donaldson Block is a three story brick building with a 2 1/2 story wood-frame rear addition. Its foundation is roughly hewn stone.

The face of the building presents the only Gibbs surround in the District. The surround encompasses the second and third floor center of the facade and used to contain recessed balconies on both floors, but they were walled in, probably in the 1930's, to provide the building with more interior space.

The surround and the edges of the facade are trimmed with brick quoining. Flanking the surround, the paired, sash windows have cyclopean, limestone lintels and sills. The facade has two cornices: a narrow one above the first floor and a wider one, supported by fifteen large, scrolled brackets, at the roof-line.

The crowning touch of the Donaldson Block facade is a hefty swan's neck pediment with a rectangular pedestal between the "necks". Up until the 1920's, at least, a large sphere surmounted the pedestal and a very tall flag-pole stood behind it.

The walls of this building may or may not be loadbearing. Whichever, removal of one and a half stories of the rear, brick wall and a substantial portion of the rear foundation wall when the addition was built resulted in noticeable out-bulging at the north-west corner and separation of brick adjacent to this corner at second story rear. This problem seems to have been checked by placement of a 3 x 45 inch steel strap secured to the bulging zone by four large bolts.

As for the addition itself, it is a clapboarded structure rising from a half level below the basement to the floor of the second story. It is not particularly distinctive.

Like many of Main Street's buildings, the Donaldson Block's sidewalls do not meet its facade at a right angle because of the street's curvature. This effect, though, is more pronounced at this address than at any other. Also, this building is farther removed from the curb-line than any other in the District.

W.P. Jenkins & Son, Real Estate and Insurance was at 54 Main Street according to an advertisement in the program for the St. Bernard's Club's Minstrel Review, circa 1930.