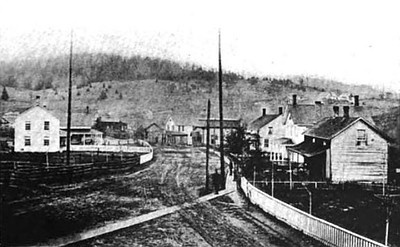 1879 photograph by George Baldwin of Main Street from the top of Berkeley Hill. Evans Cottage is on the left.

George W. Baldwin was a photographer who, with William L. Distin, and William F. Kollecker produced a rich collection of photographs of the area, that is largely preserved in the Adirondack Collection of the Saranac Lake Free Library.

George W. Baldwin was the son of Jonathan and Elvira Baldwin. He began his photographic career in the 1870s and at various times in his career had studios in Keeseville and Plattsburgh, as well as in Saranac Lake. He advertised that he was a manufacturer of gold and plush picture frames, and a publisher of books depicting Adirondack scenes. He also made stereoscopic slides which were enhanced with a rustic border. Some of his portraits have become family heirlooms and some are found in antique shops around the North Country. In about 1900, he sold his business to William L. Distin.

In 1893 he bought the Lake Placid House; he sold it in 1897 shortly before moving to Rutland, Vermont. 1

George Baldwin, well known as a photographer, in several places in New York state died in a Rutland, Vt., hospital Dec. 9th. He was injured in an auto accident a week before. Mr, Baldwin was 83 years of age.

Mr. Baldwin had photograph galleries at Ausable Forks, Keeseville and Plattsburgh and later at Saranac Lake where he was associated with the late William L. Distin.

The funeral was held at Ausable Forks. Friday, Dec. 12th.

He is survived by a daughter Dr. Jane Baldwin who has been on the faculty of Vassar College, for 23 years. He also has a sister living in Pasadena, Cal.