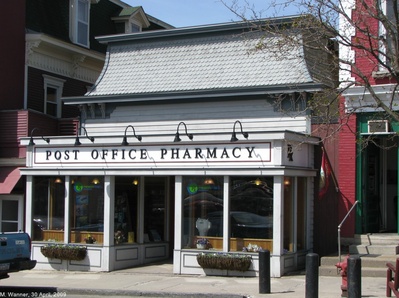 As a health resort for tuberculosis, Saranac Lake required many pharmacies to supply necessities for the thousands of patients who lived in the village and in neighboring institutional sanatoria.

The Post Office Pharmacy, the last independent pharmacy in Franklin County, got its name when it occupied a storefront on the other side of Main Street in (or near) the United States Post Office, in its previous location.

Other pharmacies serving the T. B. "industry" included