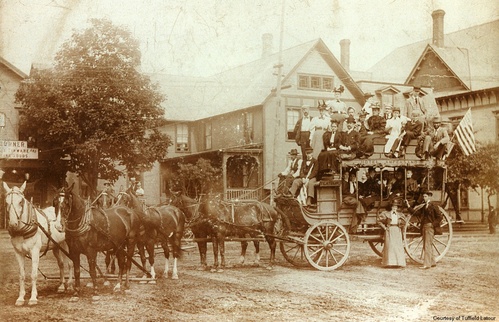 Ampersand Hotel Stagecoach, driven by Tuffield Latour (undated) The following is an excerpt from an editorial in the Ausable Forks-Elizabethtown Record-Post, December 8, 1927. The Old Philosopher, otherwise unidentified, is reminiscing about Stage Coach days of yore.

Just as he was getting himself fairly settled in the chair he glanced out and saw the bus passing on its way to Placid. This started him in a reminiscent mood. "Pretty comfortable stages, them," he remarked. "But they ain't in it with the stages of the old days, No, sir-ree. Those were the days when stages were stages and drivin' them was a man's job. The boys who drove the stages were "cocks of the walk" when I was a kid around here."

The old gentleman said that in the old days Elizabethtown, Keeseville and Au Sable Forks were the main stage routes. From this village the stages went through Black Brook to the Toll Gate where they could strike the Port Kent and Hopkinton Road for Loon Lake or continue on to Franklin Falls. He "reckoned" we knew the two other roads starting from the Forks through Wilmington Notch to Lake Placid, the same now being traversed by the buses and burned up by automobiles. Then, of course, the other road which led through Jay to Keene Valley. Stages gave a man the only real pleasure in traveling through this country. 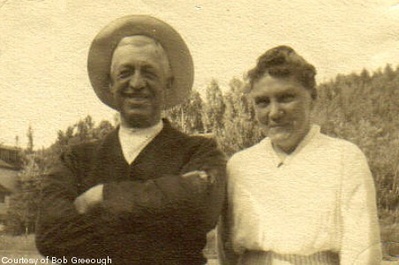 Those old stage coaches were something to remember, according to our friend England has a lot to say about the romance of the stage coach days, but what was there in England to compare with Adirondacks from the seat alongside the driver of a stage. People at the present time worry over the water boiling in the radiator climbing the difficult and dangerous Spruce Hill. Our old friend wagged his beard and had a far away look in his eyes as he told what a sight it was to see Fred Cook or some of those old time drivers handling "the ribbons" over a stage with four and six horses. No radiators to boil over and have to be cooled off in those days. He had them all at his tongue's end: Fred Cook, Charley Greenough, William Burt, Billy Hinds, Tuffield Latour, Isaiah Vosburgh and the dandy of them all, George Meserve, who came to drive for Fitch O'Brien. O'Brien was the dean of Adirondack stage drivers and one of the greatest men with horses who ever lived. He was the first man to drive a coach and four horses over the Wilmington Notch road.

In those old days Franklin Falls and "French's" meant something to the traveller. French's has long since ceased to exist as a hotel and is buried with the ghosts of yesterday. Franklin Falls, once a picturesque and romantic gem of nature, has developed into a modern, commercial hydroelectric power station built by Paul Smith, the last owner of the Franklin House. French's half way house was two miles nearer the Forks than the Franklin House and the two places used to divide the patronage of the tourists. Those places meant dinners—and such dinners. The old philosopher smacked his lips when he thought of them. "Those were the days," said he, "when one could work up an appetite for dinner and a drop of that other comfort which Mr. Volstead has condemned to oblivion."