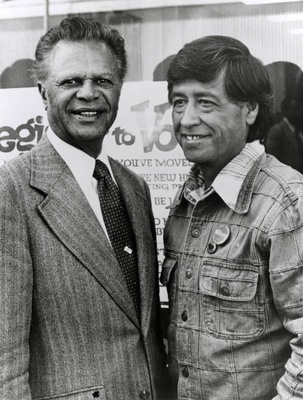 César Estrada Chávez (March 31, 1927 – April 23, 1993) was a labor leader and civil rights activist who was active in Oakland early in his activist career. He received many honors, including the Presidential Medal of Freedom in 1994. Locally, a city park, a library, and an education center/school are named in his honor.

Chavez was born on March 31, 1927, in Yuma Ariziona, in a Mexican American Family family of six children. He grew up in a small Adobe home, the same home in which he was born. His family owned a grocery store and a ranch, but their land was lost during the Great Depression: the home was taken away after his father broke an agreement to clear eighty acres of land in exchange for the deed to the house. Later, when Chavez's father attempted to purchase the house, he could not pay the interest on the loan and the house was sold back to its original owner. His family then moved to California to become migrant farm workers.

In 1944, at the age of seventeen, Chavez joined the Navy and served for two years. Chavez hoped that he would learn skills in the Navy that would help him later when he returned to civilian life. Later, Chavez described his experience in the military as “the two worst years of my life”. When Chavez returned home from his service in the military, he married his high school sweetheart, Helen Fabela. The couple moved to San Jose, and eventually had eight children.

Cesar Chavez is famous for leading the famous grape boycott in Delano, CA and also being a popular labor leader in the United Farm Workers Union. But on this page we will talk about his many connections to Oakland.

In the mid 1950s Cesar Chavez joined a political organization called the CSO (Community Service Organization) along with long-time organizer Fred Ross. The CSO Northern California chapter was based out of the Fruitvale District at Saint Elizabeth Church. Cesar Chavez began organizing in the Fruitvale district and around Oakland and the East Bay with the CSO. The CSO Began registering Latinos to Vote and dealt with issues of police brutality, racism and more bilingual programs for the local Latino community. You can say that Cesar Chavez got his political and organizing training in Oakland. Over the years Cesar Chavez would gain support from both Black and Chicano Latino allies in Oakland. During the 1965 Delano, CA Grape strike and boycott Chicanos held protests at many local grocery stores that refused to stop selling grapes, especially Safeway stores in East and West Oakland.

In 1970 the United Farm Workers were part of the 'Salad Bowl' strike in the Salinas Valley, a strike that would pit the UFW and Cesar Chavez against the Teamsters Union. A lettuce boycott was called for. Chicano and Black radicals supported the Salad Boycott including the Black Panthers who organized several protests against Safeway stores in West Oakland that sold lettuce that was being boycotted by the UFW. 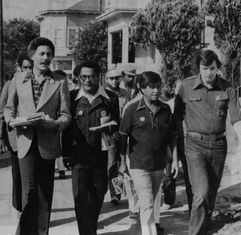 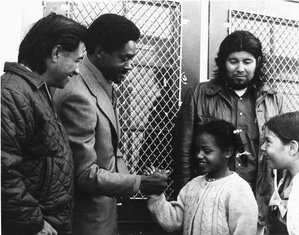 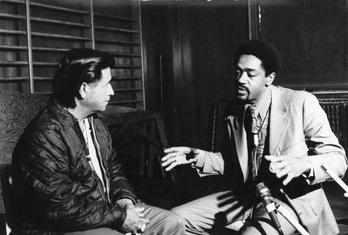 Cesar Chavez and Bobby Seale at Merritt College in 1972. 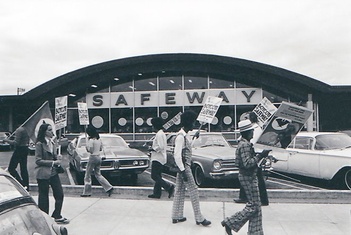 Black Panthers and Chicano's Protest Safeway in West Oakland in 1971. 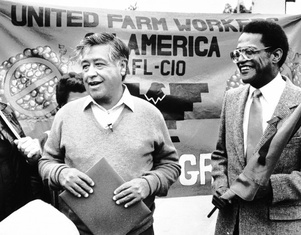