Eastmont is a neighborhood of Oakland in the Elmhurst district. The area was originally part of the Peralta ranch and later used as country homes for the Durant, Hellman Heron, Talbot and King families. 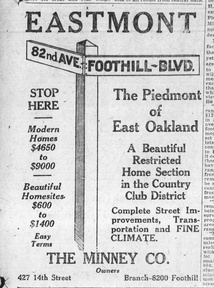 Oakland Tribune Aug 22, 1926 Eastmont was developed in the 1920s, primarily after the Chevrolet assembly plant was built in 1916. At one point, a real estate company (the Minney Company) described Eastmont "The Piedmont of East Oakland." Workers moved to the area, taking over what had been small farms and building houses and commercial space. By the time the plant closed in 1963 and moved to Fremont, there were 3550 employees there.

One subdivision in Eastmont, Columbia Park (not Columbia Gardens) was once known for its chickens!   In 1922, the Realty Syndicate ran an ad for fertilizer based on the fact that chickens pooped so much there.1

After the plant left, OUSD tried to build a school on the site. The Eastmont Mall was built there instead.