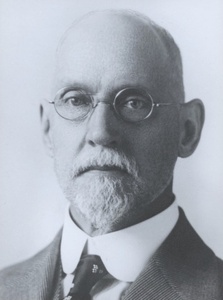 John Galen Howard (May 8, 1864–July 18, 1931) was a prominent architect who among many other projects designed the high-pressure salt water pumping station for the Oakland Fire Department that currently houses the Lake Chalet Seafood Bar & Grill and the Lake Merritt Rowing Club on Lake Merritt, in Oakland.

Born in Chelmsford, Massachusetts, Howard attended Massachusetts Institute of Technology (MIT) where he studied architecture.  MIT was the only university in the United States with an architectural program when Howard took courses there.  In 1885 he left MIT without earning his degree, and became the drafting apprentice of Henry Hobson Richardson in Brookline, Massachusetts.

Following Richardson's death Howard traveled to Los Angeles, taking positions with the firms of Caulkin & Hass, and James M. Wood.  By 1888 Howard had left Los Angles to travel around Europe.

Upon his return to Boston, Howard was employed at McKim, Mead & White, then later with the same firm in New York, where the partners provided encouragement and financial support to further his education.  Howard went on to attend the Ecole des Beaux-Arts in Paris from 1890 to 1893.

What follows is Copy/Paste ... needs to be rewritten for Oakland connection(s).

In 1893 Howard opened a private practice with Samuel Cauldwell in New York. The partners built residential and commercial buildings in New York and New Jersey. In 1898, Howard & Cauldwell entered the Phoebe Hearst International Competition for the plan for the University of California in Berkeley. Emile Bénard won the competition, but did not wish to leave Paris for Berkeley. Howard, whose entry with Cauldwell came in fourth place, was appointed to the Advisory Board of Architects for the Perpetuation of the Phoebe Hearst Architectural Plan for the University of California. Phoebe Hearst hired Howard to design the Hearst Mining Building, sending him on a tour of Europe in 1900 to study University buildings, particularly those relating to mining. Because Bénard proved too difficult for the Regents to work with, President Wheeler, a strong supporter of Howard's talents, offered Howard the position of Supervising Architect of the University in 1901. The Howards moved to California in 1902. In 1903, the University of California provided funding for a department of architecture. Howard was appointed professor at the new school, and settled into life in the Bay Area.

In 1917, Howard took a sabbatical to live and write poetry in Carmel, California. In 1918, he went on "war leave" to Europe. There he helped establish the American Expeditionary Forces University, which was intended to educate soldiers as they awaited transport home. Returning in 1919, he found the University reluctant to spend money and saw his authority as Supervising Architect began to deteriorate. Howard was officially dismissed by the Regents of the University in 1924, and in 1926 resigned as Director of the School of Architecture. He and his wife, Mary Robertson Bradbury, moved to San Francisco, residing on Russian Hill, where Howard continued to write and publish his own poetry. He died suddenly from a heart attack in 1931."