The Ladies Relief Society was established in 1872 in order to provide various compassionate services to children, poor women and the elderly living in the City of Oakland, California. Those services included housing, with the first Children’s Home built on a 14-acre site west of Broadway at the site of Studio One Art Center. 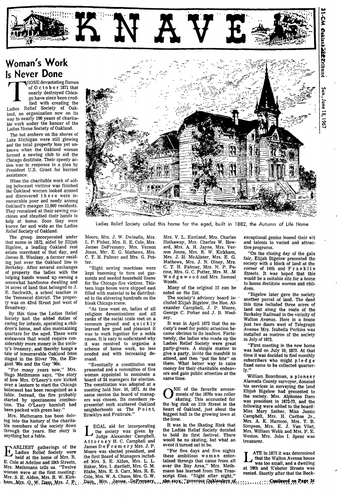 The origin of the Ladies Relief Society is told in this excerpt from a special section of the Oakland Tribune published on Sunday, June 18, 1967 2:

Those devastating flames of October 1871 that nearly destroyed Chicago have since been credited with creating the Ladies Relief Society of Oakland, an organization now on its way to nearly 100 years of charitable work under the banner of the Ladies Home Society of Oakland.

The hot embers on the shores of Lake Michigan were still glowing and the total property loss yet unknown when the Oakland women formed a sewing club to aid the Chicago destitute. Their speedy action was in response to a plea by President U.S. Grant for hurried assistance.

When the charitable work of aiding holocaust victims was finished the Oakland women looked around and discovered there were innumerable poor and needy among Oakland’s meager 11,000 residents. They remained at their sewing machines and steadied their hands to help at home. Soon they were known far and wide as the Ladies Relief Society of Oakland.

The group incorporated under that name in 1872, aided by Elijah Bigelow, a leading Oakland real estate merchant of that day, and James B. Woolsey, a farmer residing just over the Oakland line in Berkeley. After several exchanges of property the ladies with the helping hands wound up owning a somewhat handsome dwelling and 14 acres of land that belonged to J. E. Beckwith, a school teacher in the Temescal district. The property was on 42nd Street just west of Broadway.

By this time the Ladies Relief Society had the added duties of caring for infants, operating a children’s home, and also maintaining quarters for the aged. These were endeavors that would require considerably more money in the society’s treasury, and thereby hangs a tale of innumerable Oakland fêtes staged in the Silver ’70s, the Elegant ’80s and the Gay ’90s.

“For many years now,” Mrs. Hugo Methmann says, “the story of how Mrs. O’Leary’s cow kicked over a lantern to start the Chicago holocaust has been recognized as a fable. Instead, the fire probably started by spontaneous combustion. The O’Leary barnloft had been packed with green hay.”

Mrs. Methmann has been delving into the history of the charitable members of the society down through the years. Her story is anything but a fable.

EARLIEST gatherings of the Ladies Relief Society were held at the home of Mrs. R. E. Cole at Adeline and 10th Streets,

“Eight sewing machines were kept humming to turn out garments and needed household linens for the Chicago fire victims. Thirteen huge boxes were shipped east filled with material to be distributed to the shivering hundreds on the bleak Chicago scene.

“As time went on, ladies of all religious denominations and all ranks of the social scale met on a common ground and quickly learned how good and pleasant it was to work together for a noble cause. It is easy to understand why it was resolved to organize a scheme of home work, no less needed and with increasing demand.

“Eventually a constitution was presented and a committee of five women appointed to nominate a board of 24 managers for election. The constitution was adopted at a meeting held Nov. 16, 1871. At the same session the board of managers was chosen. Its members represented such scattered Oakland neighborhoods as The Point, Brooklyn and Fruitvale.” 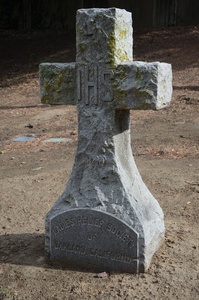 Many of the original 12 can be noted on the list.

It was in April 1872 that the society’s need for public attention became obvious to its leaders. Fortunately, the ladies who made up the Ladies Relief Society were great party-givers. A simple matter to give a party, invite the menfolk to attend, and then “put the bite” on them. What better way to raise money for their charitable endeavors and gain public attention at the same time …