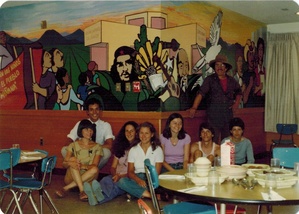 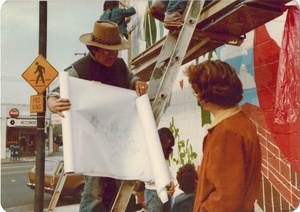 Malaquias Montoya (born 1938) was born in Albuquerque, New Mexico. He was raised in a migrant family in the Central Valley of California. He joined the Marines and through the GI Bill went to UC Berkeley in 1968 where he became a very influential artist. This was the time of the Chicano Movement and various other social movements.

His Work in Oakland

While attending UC Berkeley, Malaquias made his home in Jingletown in the Fruitvale district. He started an art collective called Mexican-American Liberation Art Front (MALAF) and became a very influential artist with this collective. Malaquias, along with MALAF, made several posters for the Chicano Movement, the Cesar Chavez boycotts and for the anti-war Movement. He was also involved with the Chicano Moratorium and was involved with starting a cultural pride festival called Dia de la Raza which was held at Sanborn Park (Now Josie De la Cruz park) in the mid 1970's. Malaquias also made posters for justice for the murder of Jose Barlow Benavidez who was killed by Oakland Police in 1976.

He directed student-executed murals at:

He was a very influential artist during the Chicano Movement days in Oakland. He later moved to Davis, California, to work at UC Davis. Since 1989 Montoya has held a professorship at the University of California, Davis, teaching both in the department of Art and the department of Chicana/o Studies.