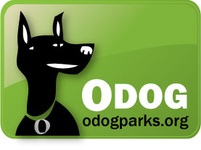 ODOG (Oakland Dog Owners Group) was founded in 1997 by Emily Rosenberg and Nancy Rieser, after they realized that most Oakland parks prohibited dogs, even on leash. They started ODOG with the mission of advocating for more access to our parks for people with dogs, for both off- and on-leash activities. ODOG is an all volunteer, registered non-profit organization, under the umbrella of the Friends of Oakland Parks and Recreation. When the controversy surrounding the Lakeview/Astro park dog park proposal began, ODOG rapidly grew in size, as people in the Lake Merritt area coalesced to support this project. The ODOG mailing list currently reaches over 5,000 people.

ODOG worked with city leaders and agencies to build four of the five dog parks in the city: Mosswood, Joaquin Miller, Jefferson Square, and Grove-Shafter. They've been working to build a safe and legal place in the Lake Merritt area since a dog park was included in the Lake Merritt Master Plan, approved by City Council in 2002. The proposal at Lakeview/Astro park met with controversy in 2010, but appears to be moving forward at a new alternative site at Snow Park. 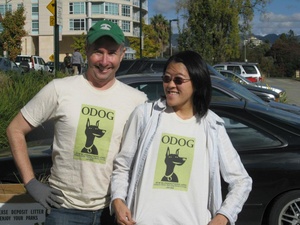 Sean Sullivan and Michelle Dong volunteer with ODOG at Lake Merritt Weed Warriors.
Photo by Paul VidicanODOG has a Memorandum of Understanding with the city to provide volunteer maintenance at all of Oakland's dog parks. In addition, volunteers also prep the Joaquin Miller dog park for it's periodic transition to a parking lot for the Woodminster Amphiteater's summer performances. The director of the Woodminster, as well as Public Works have both sent letters to ODOG commending them for the cleanliness and maintenance of the parks. At the September 11, 2013 Parks and Recreation Advisory Commission meeting, four of the commissioners had mentioned that they had recently visited the dog parks, and commented on how clean and odor-free they all were. ODOG volunteers also routinely serve at various charity/public events, including: