The Root family traces its Oakland connections back to at least 1883, and lived for many years at what is now 1425 Lakeside Drive.

In the 1870s, Alfred and Abbie were living in Stockton, where Alfred farmed and owned some land. All 3 children were born in Stockton: 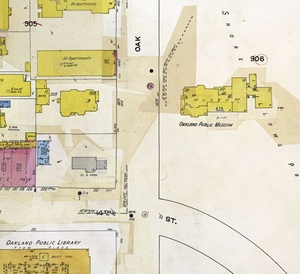 The June 2, 1883 San Francisco Examiner reported that Samuel Merritt had sold the property "at the corner of 14th and Oak" to A.W. Root for $8,000. It's unknown whether that included the house or not, but it was a lot of money for 1883 regardless. The address at that time was 1215 Oak St.; it would later become 1425 Lakeside. Merritt lived nearby in the block between Jackson and Madison, 14th and 15th, and had owned and developed the area, including constructing what is now known as Camron-Stanford House across the street.

Besides directory listings, the next reference to the Root family is in the Oakland Tribune in 1888. They're mentioned in fine company: Josiah Stanford who lived across the street, A.K.P. Harmon, and other area residents. But not for a great reason; the sanitary inspector was calling them out because their sewage drained into Lake Merritt. 3

Although the 1887-1888 Oakland directory lists Alfred as a "farmer", it's clear from the location and size of the house that he wasn't doing much of the farming himself anymore and was fairly well-to-do.

Both Zoe and Maud attended the Snell Seminary in Oakland, "one of the best known and most fashionable schools on the Pacific Coast." In 1894 and 1895 the Roots hosted a luncheon and a dancing party for the class of 1895, which was probably Maud's class. 4,5 Some years later in 1931 they were scheduled to host a gathering for the Snell Alumnae Association. 6

The Roots continued to appear on the society page: a musicale for the pupils of Miss Kate Halsey; a reception for a recently married friend; an announcement that the family was to spend the rest of the summer at Lake Tahoe. 7

The morning of December 20, 1898, A.W. died at age 72. The Stanislaus County Weekly News published in Modesto noted that he had large land interests in Stanislaus County. 8 His remains are probably at the San Francisco Columbarium; 9 a second FindAGrave entry suggests Mountain View Cemetery, but no evidence has been found to support that.

Abbie was made the administrator of A.W.'s estate. The estate spent a while in probate, long enough for the family to request an allowance. The probate papers indicate A.W.'s estate was worth $72,677 and generated an estimated $5,000 a year in income, so the requested $300 a month would be easily covered and the request was granted. $5,000 a year was a considerable income in 1900, worth $800,000 or more in 2021 terms.

Daughters Zoe and Maud never married, but continued to live at 1425 Oak until c.1950. Their names occasionally appeared in the newspaper, mostly notices of selling land in San Francisco and Modesto.

Abbie died in 1917; a few years later in 1919, her brother John Randolph Daggett died in San Francisco. He was apparently well-to-do, too. His will left $10,000 to the YWCA of San Francisco, smaller bequests to different relatives, and the remainder of the estimated $100,000 to be divided four ways between his nieces and nephew in Oakland, and another nephew, Stanley Putnam Daggett, in NY. 11