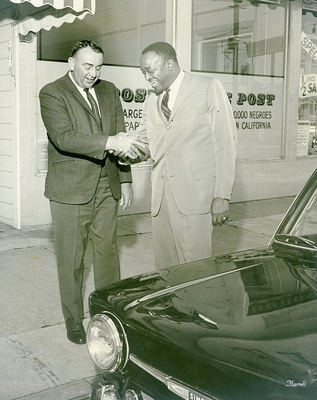 Thomas Lucius Berkley (August 9, 1915 – December 27, 2001) was a Black lawyer, newspaper publisher, world class athlete, and Chairman of the Oakland Port Authority Board of Commissioners, serving 1969-1981. He was the first Black commissioner, serving two terms including the position of president. 2 He played a major role in improving the Port by helping it become a container operation that moved cargo with cranes. He also served on the Oakland School Board and the California World Trade Commission.

Berkley was born in DuQuoin, Illinois, on August 9, 1915, the grandson of four slaves. His father was a coal miner and labor union organizer, his mother a teacher. He was the seventh son of a seventh son, and therefore it was predicted that he would have good fortune.3 Mr. Berkley's parents decided in 1920 that the segregated schools in southern Illinois were not adequate for their children, so they and seven of their eight children (their oldest daughter was already married) moved to California's Imperial Valley where they lived for six years. The family later moved to a ranch in Fullerton. Four of the children graduated from college, three of whom earned advanced degrees. His sister Ruby Berkley (Goodwin) was a writer and actress. 5

Berkley studied at Fullerton College, then transferred to UCLA where he studied economics and then law. At UCLA track coach Brutus Hamilton rated him as the world's best hurdler in 1938. When the 1940 Olympic Games were canceled, Mr. Berkley joined the Army where he became an officer specialized in logistics and achieved the rank of second lieutenant. 2 After completing his military service Mr. Berkley returned to Oakland where he established the largest racially integrated law firm in the United States. He formed The Post newspaper publishing group serving Oakland and Northern California, and the Spanish language El Mundo newspaper covering the Bay Area. His daughter Gail Berkley-Armstrong worked as assistant editor for 32 years.

When Mr. Berkley died on December 27, 2001, then-mayor of Oakland Jerry Brown announced that the portion of 20th Street in downtown Oakland where Berkley's law office was located would be renamed in his honor. On May 7, 2002, the City Council approved a resolution officially renaming the stretch of 20th Street from Castro Street to Harrison Street "Thomas L. Berkley Way." 4

At the ceremony where Mayor Brown made the initial announcement, numerous speakers described how Mr. Berkley had impacted their lives:

Congresswoman Barbara Lee: The world has lost a giant of a man. A brilliant leader. A champion for justice.

Attorney Donald Ray Hopkins: Tom Berkley ranks among all the great leaders of every hue and ethnicity that this country has produced.

Congressman and Oakland mayor Ron Dellums: Tom was a visionary, a globalist, a teacher.

Newspaperman Bill Hughes: A coal miner's son, a longshoreman who struggled for an education and never lost his humanity or his desire to improve the human condition, especially for the less fortunate.1

The Berkley Maynard Academy, a charter school in the Golden Gate neighborhood, is named after Mr. Berkley and Robert Maynard, two prominent Black publishers from Oakland.