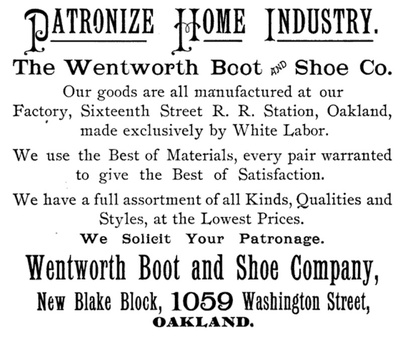 It was founded by Ira Martin Wentworth (June 22, 1837 - 1916). Wentworth was born in Rochester, New Hampshire. He learned shoe making from his mother, and the use of tools from his father, so he was also an able blacksmith and carpenter. 1

Wentworth lost substantial money purchasing a tract of land in Berkeley (Gilman/Harrison/San Pablo/2nd Street) in 1878 before an economic downturn. 1 But the property went on to become more valuable, and the "Wentworth Boot & Shoe tract" is referenced frequently in records of the time.

An obituary of William P. Jones in 1900 describes the company as "a losing venture." Jones lost $5,000 investing in Wentworth, along with many thousands in other failed investments. 5