The Brookdale Lodge is reopened.  The new owner is Praven Patel. Major renovations have taken place since the fire in 2009

In 2013, Sanjiv Kakkar,  the owner of Brookdale Lodge, was sentenced to one year in jail for felony insurance fraud, failure to disclose a worker's injury and other charges. 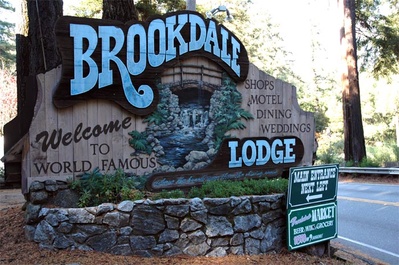 The Brookdale Lodge is a historic, world famous hotel and dining facility, available for travelers as well as those seeking to hold large events. The lodge is located in the woods surrounding Highway 9, away from any city action. The lodge itself provides different types of lodging— standard hotel rooms, honeymoon cottages, suites and two theme rooms. There is also a small cocktail lounge, a pool table, and a larger, separate stage/live music area. The Lodge has seen its fair share of famous guests, and is also known for ghost sightings.

The lodge features two separate restaurants, The Brookroom (as of 2022 is under renovation), and the Pancake House and Grill (which is now an all new Diner), which is more currently known as the Brookdale Cafe & Grill, or simply as the Brookdale Grill. The pancake house is open for breakfast and lunch, as well as weekend dinners during the high season. The Brookroom, who's giant dining room has Clear Creek running through it, features fine California-style dining with a resident chef. It is only open for nightly dinners and Sunday brunch.

The Brookdale Cafe & Grill and other businesses are in this wing

James Dean is on one side of the hotel wing