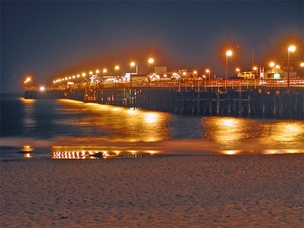 The wharf at night from the Main Beach side 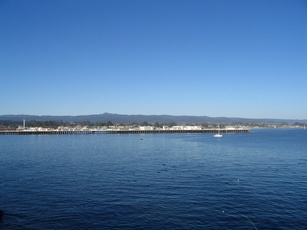 The wharf from afar

Located between Santa Cruz Main Beach and Cowell's Beach, the Santa Cruz Municipal Wharf wasn't the only wharf in the area when it was built in 1914, but the city really needed a new one, and it was built after a $172,000 bond measure was passed. Any structure that goes out to the sea is a pier. The Santa Cruz Municipal Wharf is called a "wharf" due to an error written in the bond measure. A Wharf goes parallel along the water. The piers in Capitola and Monterey are also mis-named as wharf instead of pier.

In 1982, an effort was made to change the name to "Fisherman's Wharf." Two members of the Santa Cruz City Council objected because they believed the name "Fisherman" was sexist.