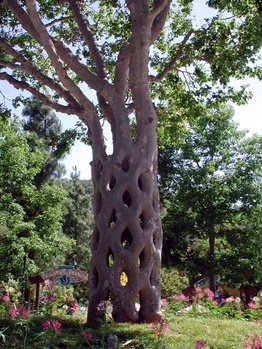 The Circus Trees are now located in Gilroy, Ca

Scotts Valley was home to a very unique botanical tourist attraction for nearly 20 years when Axel Erlandson (horticulturist, 1884-1964) brought his "Circus Trees" from Hilmar, California to the area in 1946. Erlandson came up with the idea to create these trees after he noticed two Sycamore trees naturally grafting themselves to each other. In both Hilmar and Scotts Valley, Erlandson spent years experimenting with designs while growing his unique tree creations to maturity. He was inspired to create his roadside attraction after vacationing in the area with his family and visiting the Mystery Spot. Photos of the trees were often featured in the 1940's and 50's in Ripley's "Believe-It-or-Not," and in "Life" magazine. In 1963, Tree Circus was sold and Lost World was created with giant, colorful dinosaurs, which were visible from Highway 17, were brought in. When that business failed, and the property was vacated for some time, the health of the circus trees began to suffer. Mark Primack, a Santa Cruz architect then stepped in as an activist and helped preserve the health of the trees until they were bought by Michael Bonfante in 1984. He had the idea of displaying them in a theme park he was conceiving that finally opened in 2001, and is known today as Gilroy Gardens. One original tree still remains in its original Scotts Valley location, though it isn't as spectactular looking as the specimens that were moved, and two Circus Trees are located at the recently developed Tree Circus Center on Scotts Valley Drive.