​One of the most well-known aspects of San Francisco is that it's hilly. The hills offer breathtaking views of the bay and city lights, and provide a challenging workout to pedestrians and cyclists (whether they want it or not!). In some areas, the hills are so steep that the city builds concrete stairways instead of regular sidewalks. 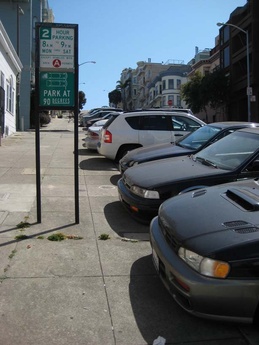 In some places, a sign warns to park at a 90-degree angle from the curb to prevent runaways. (2007)

San Francisco's tallest hills are under the Twin Peaks, Forest Hill, West Portal, Bernal Heights and Diamond Heights neighborhoods, which are all found just southwest of the city's center.

Several cities claim to have been built on seven hills ala Rome/Jerusalem (see Wikipedia's extensive list).

If you want seven, wikipedia chose Telegraph Hill, Nob Hill, Russian Hill, Rincon Hill, Mount Sutro, Twin Peaks and Mount Davidson, but you are free to do as you like.

SFSU's literary rag is called Fourteen Hills. I have no idea which hills this refers to.

A topographical map of the city can be found on the SF Bike Coalition's website.