The T-Third Muni rail line passes through Mission Bay, as does the N-Judah line, which comes to an end at the Caltrain terminal at Fourth and King streets.

Mission Bay is currently undergoing rapid development with many building projects under construction. In a nice article about all the changes in Mission Bay, Tiffany Bohee director of San Francisco’s Office of Community Investment and Infrastructure said: "“The reason why Mission Bay is so attractive for residential and commercial projects is that the development pathway is simple,” Bohee said. “There are relatively few hurdles compared to other neighborhoods in the blood sport of development in San Francisco.”

From a decrepit and seemingly abandoned old rail yard 15 years ago, Mission Bay has sprouted into San Francisco’s fastest-growing neighborhood."

That article also has a nice brief history of the neighborhood:

"The land was owned by Southern Pacific, which spun off the holding company Catellus to develop Mission Bay. Plans remained in limbo for years, but when UCSF began looking for space to expand in the 1990s — including options in Alameda and Brisbane — Mayor Willie Brown spearheaded an effort to get the site developed. The city gave UCSF 13 acres and Catellus gave 30 acres, and UCSF embarked on a mission to create a new center for biotechnology."

Probably a big part of the growth is also due to the fact that the part of SOMA around the Caltrain station is mostly built up at this point but there are still many people (who are able to afford the prices of new luxury apartments) who want to live pretty close to the Caltrain to get to jobs in the South Bay. 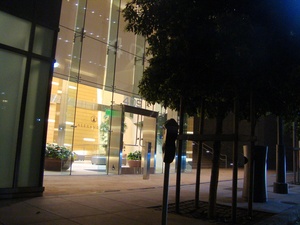 Wow such new office! Security keypad has its own metal pole because why not. (photo by mk30)

"Intense public scrutiny, fear of newness and an over cautious / overbearing planning department is contributing to bland architecture.
If I was a developer and I knew how difficult and expensive it is to get things built in this city, I would go with the safest, blandest architect every time.
This city is great for so many reason. Promoting and supporting good architecture is not one of them."

"Mission Bay was constrained by overly "low" height limits from the beginning by the interference of politicians (yes, YOU, John Burton) at the instigation of folks on Potrero Hill, who, I hope, now enjoy looking at the ugliness they created. Then there has been simply no motivation toward good design: Mission Bay is a deadly combination of governmental (UC, SF) and corporate (Alexandria REIT) blandness from players who have operated the same as they would have in a suburban office park. Add in a significant number of "affordable" housing players seeking maximum square footage for the buck and there was never any hope it would all be attractive, just functional."