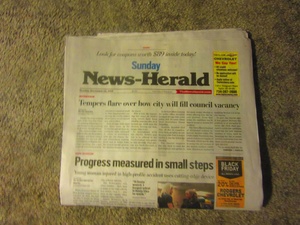 A Sunday publication. The News-Herald is the main newspaper of the Downriver area owned by Digital First Media. Its offices are located on Prechter Boulevard (Interstate 75 service drive) between Allen Road and Northline Road in Southgate. It is published on Wednesdays and Sundays, although certain retailers often receive the Sunday editions on the Saturday before.

It was originally founded in Wyandotte in 1880 and grew under the initial tutelage of editor J.D. Haven.  For many years the main office was located at the corner of Eureka Road and 22nd Street in Wyandotte, while the competing Mellus Newspapers had their office on Fort Street north of Southfield Road in Lincoln Park.

In 1986, the publication was purchased by Heinz Prechter and merged with Mellus to form Heritage Newspapers. By this time the publication had grown to include the "Weekender" editions available on Saturdays, with individual names hearkening back to the former Mellus editions (Lincoln Parker, Melvindale Messenger, Southgate Sentinel, etc.)  These Weekender editions were dropped in favor of the new "Heritage Sunday" format in August 1990.  Between 2006 and 2012, a third publication was issued on Fridays.  The Wednesday and Sunday publications continue today.

Initially, the News-Herald continued maintaining separate headquarters in Wyandotte and Lincoln Park before moving to Southgate in 1988. After Prechter's suicide in 2001, the paper was acquired by the Journal Register Company, which later became 21st Century Media, which filed for bankruptcy in September 2012 and was then acquired by Digital First Media, who also owns other Michigan newspapers such as the Detroit News, the Oakland Press and Macomb Daily.

In January 2013, the Downriver Genealogical Society and the Bacon Memorial District Library began a still-ongoing process of digitizing every edition of The News-Herald and it's predecessors from 1880 to the present day. The DGS is in charge of editions from 1943 to 2003, while the rest is handled by the Bacon Library. As of 2015, the editions from 1880 to 1945 are available as .pdf files on the Bacon Library website.