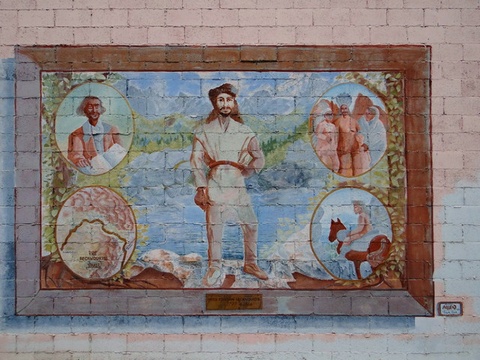 A mural on D Street in Historic Downtown Marysville depicts James Pierson Beckwourth. Photo by queerbychoice. James Pierson Beckwourth (1798-1866), also known as Jim Beckwith, was an African-American pioneer and fur trapper who, in 1850-1851, forged what at the time was the lowest, safest passage across the Sierra Nevada mountain range. In the Yuba-Sutter area, the annual Beckwourth Frontier Days living history festival re-enacts his era, and Beckwourth Riverfront Park Complex in Marysville is named in his honor. The town of Beckwourth in Plumas County is also named for him.

He was born in Virginia in 1798, to an African-American slave woman and an Englishman, Sir Jennings Beckwith. His father emancipated him from slavery and raised him as a fully acknowledged son. His family moved to St. Louis, Missouri, around 1809. He studied to be a blacksmith until age 19 and then worked as a lead miner. At age 26, he went west with General William Henry Ashley's Rocky Mountain Fur Company, serving as a wrangler. He soon became known as a prominent trapper and fighter, often passing as a Native American in the eyes of his white colleagues. His passing was aided by a campfire story that his trapper colleague Caleb Greenwood told in 1826, claiming that Beckwourth was the child of Chief Big Bowl of the Crow and had been stolen as a baby by Cheyenne raiders and then sold to whites. He also married two Blackfoot women, although neither marriage appears to have lasted much more than two weeks.

In 1826, he was captured by the Crow while trapping in the dangerous border country between the areas of Crow, Cheyennes and Blackfoots. The capture may have been prearranged by the Rocky Mountain Fur Company as a means of establishing trade, although if it was, it didn't work out for them. The Crow admitted him to their nation, which he said in his autobiography was due to the rumors of his supposed Crow ancestry. For the next nine years, he lived with the Crows, assisting them in their raids against the nearby Native American nations. He also continued fur trapping, but he sold his furs to the American Fur Company rather than to his former colleagues in the Rocky Mountain Fur Company. He married up to ten Crow women and rose in their hierarchy from warrior to chief and leader of the Dog clan. He claimed to have even risen to become the highest ranking war chief of the Crow Nation, although this was never verified. Boastful exaggeration was valued in those days as part of the ability to "spin a good yarn," as seen in the legendary tall tales of the era, and Beckwourth is known to have participated in this tradition, occasionally even claiming to have been the hero of events that other people had actually performed, so it is impossible to know for sure how high a rank he really achieved. He seems to have looked back fondly on his time with the Crow, however, devoting more than half his autobiography to those years.

In 1837, the American Fur Company refused to renew his contract, so he left the Crow and volunteered for the Second Seminole War in Florida. In his autobiography, he claimed to have been a soldier and courier, but official records indicate that he was a civilian wagon master. In 1838, he began working a trading outpost in Fort Vasquez, Colorado, trading with the Cheyenne. In 1840, he became an independent trader, helping build the Pueblo, Colorado, trading post that gave rise to the city of Pueblo. Beginning in 1844, he traded on the Old Spanish Trail between the Arkansas River and Mexican California. When the Mexican-American war began in 1846, he stole nearly 1,800 Mexican horses and became a U.S. Army courier.

He returned to California when the Gold Rush began in 1848. He opened a store in Sonoma, but quickly sold it and moved to Sacramento, where he spent some time as a professional card player until the new city of Marysville hired him to forge an easier path through the Sierra Nevada Mountain Range that would spare settlers from the travails of Donner_Pass. In 1850, he discovered Beckwourth Pass, which at that time was the lowest known pass through the mountains. In 1851, he established Beckwourth Trail, which began near Pyramid Lake and Truckee Meadows, climbed to Beckwourth Pass, and descended between two forks of the Feather River down to Marysville. This new trail spared the settlers about 150 miles and several steep grades and dangerous passes, including Donner Pass. He led the first intact wagon train through the Sierra Nevadas via his trail. However, when Beckwourth tried to collect his payment for this accomplishment, Marysville leaders refused to pay him, saying that the city had recently suffered from two huge fires and could not afford it. He attempted to sue the city, but lost on the grounds that only white people had standing to sue in the California courts.

Beckwourth established a ranch, trading post and hotel that later became the town of Beckwourth in Plumas County. In the winter of 1854-55, he dictated his autobiography to Justice of the Peace Thomas D. Bonner, who edited it and published it as a book called The Life and Adventures of James P. Beckwourth: Mountaineer, Scout, Pioneer and Chief of the Crow Nation of Indians. The book was fairly successful, and according to the contract, Beckwourth was entitled to one half of the proceeds - but just like Marysville, Bonner never paid him.

Beckwourth left California in 1858, returning to Missouri and then settling in Denver, Colorado, in 1859, establishing himself as a storekeeper and local agent for Native American affairs. In 1864, he was forced to act as a scout for a campaign against the Cheyenne and Arapaho that led to the Sand Creek Massacre. As a result, the Cheyennes refused to do any further business with him. In 1866, he died of natural causes in a Crow village in Montana, which he had been passing through while serving as an army scout.