Marysville is the county seat of Yuba County and is nicknamed "Gateway to the Goldfields" or "California's Oldest Little City." It is located on the east bank of the Feather River (opposite Yuba City) and the north bank of the Yuba River (opposite Linda and West Linda); south of Tambo, Mello, and District 10; and southwest of Hallwood. It features the intersection of the former Western Pacific and former Southern Pacific railroad tracks (both of which are now owned by Union Pacific Railroad); this intersection is known as Binney Junction. It also features four bridges: the 10th Street Bridge and the 5th Street Bridge, which both lead to Yuba City; the E Street Bridge, which leads to Linda and West Linda; and the Simpson Lane bridge, which leads to Linda.

Marysville has a population of 12,838 (as of the 2009 California Department of Finance estimate), which is a 0.9% increase from the previous year and a 4.6% increase from 2000. Its total area is 3.6 square miles. Its elevation is 62 feet. The average annual rainfall is 21.5 inches. The average high temperature in July is 96.3°, and the average low temperature in January is 38.0°. The native plant communities of Marysville are central oak woodland and riparian forest.

The Appeal-Democrat newspaper is printed in Marysville and serves the entire Yuba-Sutter area. Radio stations KRCX-FM 99.9 and KMYC-AM 1410 broadcast from Marysville.

It is illegal in Marysville to swear, make obscene gestures, or use bawdy language in any public place within the hearing range of two or more people. The punishment is a $250 fine. (Per Marysville Municipal Code § 9.12)

The U.S. Postal Service sometimes lists addresses in Dantoni, Linda, Hallwood, Hammonton, Iowa City, Loma Rica, Marigold, Mello, Ostrom, Ramirez, and Tambo as being in Marysville, because they are all in the 95901 zip code. However, on the Yuba-Sutter Wiki, we prefer listing the more specific locations. 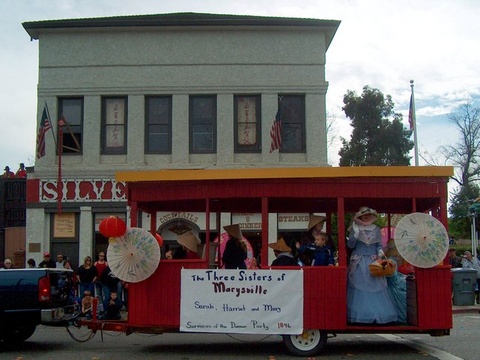 Donner Party Float in the 2009 Bok Kai Parade. Photo by queerbychoice. A Nisenan village, numbering about 100 people, used to be located in what is now Marysville. The people of this village were called the Memals. When Theodor Cordua settled in Marysville in 1843, 86 of the Memals moved across the Yuba River to what is now Linda.2

Another village, numbering about 50 people, was located at the northern end of what is now Marysville—about half a mile from the Feather River and two miles from the Yuba River, just beyond where the levee now stands. The people of this village were called the Tomchas.3

Marysville was originally called Yubaville, but because the land on the west side of the Feather River had already been dubbed "Yuba City" (although it would not be officially incorporated as a city until 1908), the name Yubaville was deemed too similar to that. It was renamed Marysville for Mary Murphy Covillaud and incorporated as a city in 1850, when California first became a state. In the 19th century, Chinese immigrants nicknamed it "Third City" because it was the third city they came to after San Francisco and Sacramento.

The first City Directory of Marysville, published in 1853, described Marysville as the second most populated city in California, after San Francisco. Marysville had a population of just under 10,000 people at that time - not much smaller than its population today. But Marysville is now by far the smallest and least populated of California's seven original cities. The Levees surrounding it on all sides prevent it from expanding its geographic area.

Marysville violently drove all its Chinese residents out of town in February 1886 (as did Wheatland). It remained a sundown town (in which Chinese people and other people of color were threatened with violence if they attempted to live in the city or to remain in it after sundown) until apparently rather recently, although the policy became gradually less overtly stated in public. The Chinese-American population is still almost zero to this day, although other Asian-American people are beginning to feel comfortable living here; in particular, the significant Hmong-American Community of nearby Linda is beginning to integrate into Marysville.

The Bok Kai Temple and Marysville River Pumps are some of the historic locations in Marysville. 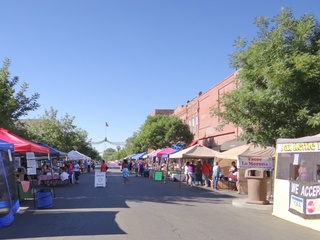