Ellis Lake is an artificial lake in Marysville, named for W. T. Ellis, Jr. The park surrounding it is called Ellis Lake Park. The south section of the park is bounded on the north and south by 14th and 9th Streets and on the east and west by B and D Streets, while the north section of the park extends approximately to 16th street and is bounded on the east and west by C and E Streets.

There are several islands in the center of the lake, including one called Gazebo Island and another called North Ellis Lake Island. Pedal boats crisscross the lake, and people fish in it. The adjoining park provides picnic tables. Marysville Municipal Code § 16.50 tells how to apply for a permit for your group to have exclusive use of Gazebo Island or North Ellis Lake Island during a specified time period.

Canadian and domestic geese, mallard ducks, red-winged blackbirds, and various other birds can be seen at the lake. They frequently wander out onto nearby 9th Street, stopping traffic as drivers try to avoid hitting them. 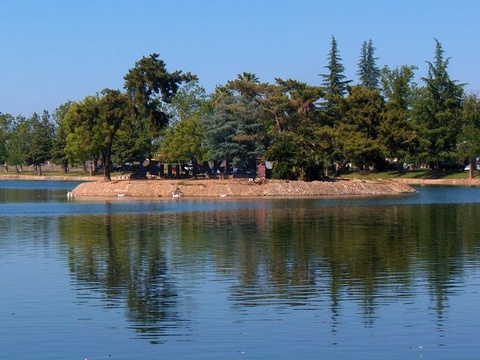 Island at the south end of Ellis Lake. Photo by queerbychoice. 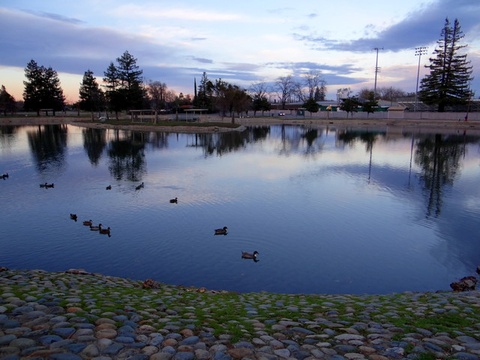 The north end of Ellis Lake at sunset. Photo by queerbychoice.

Per Marysville Municipal Code § 6.20, it is illegal to swim in, wade in, waterski on, have any form of body contact with the water of, or place or operate a motorboat in Ellis Lake without special written permission from the Marysville City Council. This is because the water is polluted. Punishment is a $100 fine for the first offense and a $150 fine for each subsequent offense.

Per Marysville Municipal Code § 16.30, fishing in Ellis Lake is permitted with a valid fishing license. Punishment for fishing without a valid license is a $150 fine.

Per Marysville Municipal Code § 16.40, it is illegal to use, possess, or sell fireworks in Ellis Lake Park without a permit from the director of public works or the fire chief. Punishment is a fine of up to $250.

Per Marysville Municipal Code § 16.20, it is illegal to possess or consume any alcoholic beverage in Ellis Lake Park without a permit. Punishment is a $250 fine.

The area that is now Ellis Lake was originally a natural spillway of the Feather River. In times of high rainfall, excess water from the Feather River spilled out into Marysville, discharging into the Yuba River at what is now F Street. When the Marysville Levees were built, this spillway was closed off at both ends, first by small levees beginning in 1857 and then more effectively by the current levees, which were built in 1875. But between the levees, the channel through which the excess river water had flowed remained, collecting rainwater each winter. Residents referred to it as "the slough." W. T. Ellis, Jr., for whom Ellis Lake is named, wrote in his autobiography Memories: My Seventy-Two Years in the Romantic County of Yuba, California about this slough and how he worked to transform it into its current form as an artificial lake: 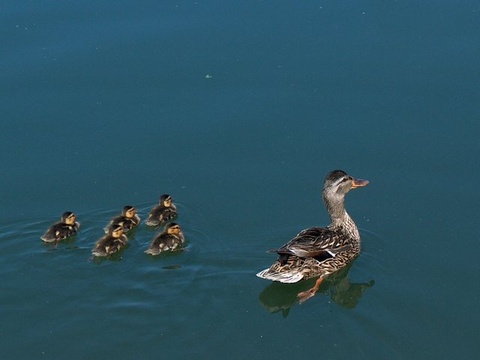 Duck and ducklings in Ellis Lake. Photo by queerbychoice. In 1924, the Women's Improvement Club of Marysville commissioned Robbie McLaren, the designer of Golden Gate Park, to turn the current site of Ellis Lake from a slough into a more enjoyable lake. The project was completed in 1939.

In 2002, the skeletal body of Mary Jane Gooding was found in a car at the bottom of Ellis Lake, in seven feet of water. Police believe she accidentally drove her husband's car into the lake in 1981. Her children contend that she was a victim of foul play.

In 2004, the annual Fourth of July fireworks display went awry when a firework was accidentally shot from Gazebo Island into the crowd surrounding the lake. At least 15 people were injured, including a 14-year-old girl who had to have her leg amputated just below the knee.

In 2007, a new computerized fountain and lighting system were installed on one of the islands. The new system lights the lake in 37 different colors from 8pm to midnight, year-round.