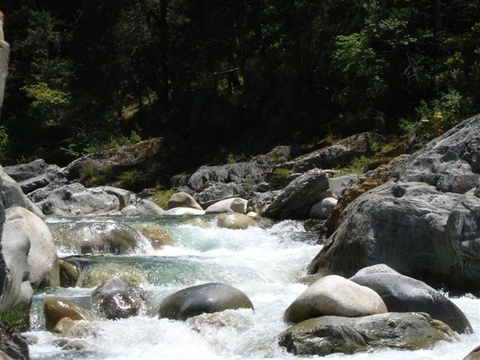 The Yuba River main stream is formed by the confluence of the north and middle forks just downstream of the Bullards Bar Dam, about four miles east of Dobbins. The south fork flows into it at Harry L. Englebright Lake, which is formed by a dam on the river.

The north fork begins at Yuba Pass in Nevada County and flows 41 miles, passing through the Bullards Bar Reservoir (formed by a dam on the river) before merging with the middle fork about four miles east of Dobbins. Tributaries of the Yuba River north fork in Yuba County include Canyon Creek, Deadwood Creek, Lost Creek, Slate Creek, Cassidy Ravine, Gophner Ravine, and Quayle Ravine.

The middle fork begins at Jackson Meadows Reservoir in Nevada County and flows 55 miles to merge with the north fork just downstream of the Bullards Bar Dam.1 A tunnel is used to divert some of the water from the middle fork to Bullards Bar Reservoir. Tributaries of the Yuba River middle fork in Yuba County include Clear Creek, Moonshine Creek, Nevada Creek, Oregon Creek, Marys Ravine, and Studhorse Canyon.

The south fork begins at Lake Spaulding in Nevada County and flows 62 miles to enter the Yuba River main stream at Harry L. Englebright Lake (formed by a dam on the river) on the border between Yuba County and Nevada County.

No water craft powered by internal combustion gasoline or diesel engines is allowed on the Yuba River above the Daguerra Point Diversion Dam, except with permission from governmental entities. (Yuba County Ordinance Code Title VIII § 8.57.021) 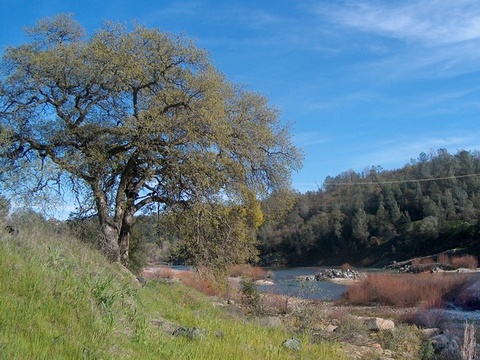 A valley oak next to the Yuba River in Sicard Flat. Photo by queerbychoice. The Yuba River was mined extensively for gold during the Gold Rush. Mine tailings fell into the river, raising the riverbed by 18 feet at Marysville, 26 feet at Daguerra Point Diversion Dam near Browns Valley, and 84 feet at Smartsville.2 As a result, the river spilled out into a two-miles-wide, 20-feet-deep flow that overran hundreds of thousands of acres of orchards and pastures and (repeatedly from the late 1860s onward, and especially in 1875) buried the entire city of Marysville and much of what is now Yuba City in as much as 25 feet of muck. In 1868, angry farmers in the Marysville-Yuba City area formed the Anti-Debris Association, which filed a lawsuit against the wealthy mining companies upstream.

In 1880, a dam 11,000 feet long (nearly two miles) was built about nine miles upstream from Marysville, in order to re-confine the Yuba River below that point to a narrower bed. This was called the Yuba Dam. It was built from brush, wire, and logs, and cost approximately $100,000. It no longer exists today, but several newer dams farther upstream continue to serve the same purpose. In addition, the submerged Daguerra Point Diversion Dam was built exclusively to prevent hydraulic mining debris from entering the Feather River and the Sacramento River.

In 1884, Judge Lorenzo Sawyer ruled in favor of the Anti-Debris Association in its lawsuit, prohibiting hydraulic mining except in cases when the debris could be prevented from entering the rivers and flowing downstream. Since preventing the debris from doing exactly that proved to be impractical in most cases, hydraulic mining was never done on a comparably large scale after that ruling.

However, much of the debris from past hydraulic mining still remains in the river. In 1905, Major William W. Harts of the California Debris Commission, "The quantity of material lodged in the river due to mining has been variously estimated, but it seems safe to say that there are now upwards of 333,000,000 cubic yards in the bed of the lower Yuba, this in a distance of about eight miles above Marysville."

After hydraulic mining was largely ended, Wendell P. Hammon pioneered the practice of gold dredging on the Yuba River, inventing specialized dredging material to sort through the existing debris left behind by hydraulic miners and extract any remaining gold from it. He became a millionaire in the process, and the dredging company towns of Hammonton and Marigold were created to house the dredging companies' many employees. One large dredger still operates on the Yuba River to this day.3 A large but remote segment of the Yuba River in Nevada County is designated for recreational dredging. This area is located approximately 1.5 miles above Humbug Creek and can only be reached on foot, via the South Yuba Trail.4

Bret Harte composed the following poem about the Yuba Dam, which was built in 1880 about nine miles upstream from Marysville and no longer exists today. The dam was 11,000 feet long (nearly two miles) and was used to re-confine the Yuba River to a narrower bed after the debris from hydraulic mining had caused it to spill out of its channel into a two-miles-wide, 20-feet deep flow. The Yuba Dam was built from brush, wire, and logs, and cost approximately $100,000. It has since been replaced by several newer dams farther upstream (including the Daguerra Point Diversion Dam, which is the closest one to the location of the former Yuba Dam).