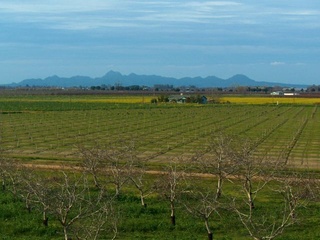 Farmland south of the Sutter Buttes. Photo by queerbychoice. Farming in the Yuba-Sutter area began with John Sutter's Hock Farm in 1841 and hasn't stopped since. To this day, it remains one of the leading industries in Sutter County and in the portion of Yuba County that is in the Sacramento Valley. Farm products invented in the Yuba-Sutter area include Proper Wheat (developed by Edward Proper in 1868), Thompson's Seedless Grape (developed by William Thompson and first propagated slightly west of Sutter in 1872), Phillips Canning Cling Peach (developed by A. F. Abbott and Joseph Phillips in the 1880s), and the Rio Oso Gem peach (developed by William F. Yerkes in the 1920s). 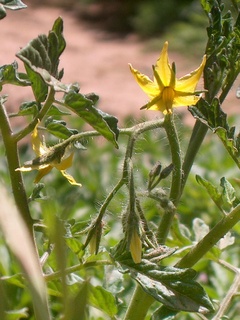 An almond tree blooms at the foot of a Marysville levee. Almonds are the sixth leading crop in Sutter County. Photo by queerbychoice. 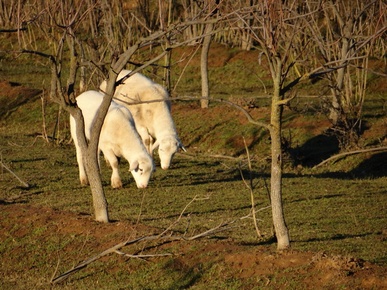 Sheep graze in an orchard at the northern edge of Marysville. Photo by queerbychoice. 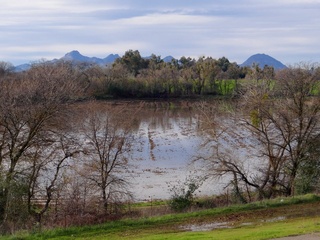 A flooded rice field directly north of St. Joseph Catholic Cemetery in Marysville. Rice is the leading crop in Yuba County. Photo by queerbychoice. As of 1997, Yuba County ranked sixth among all the nation's counties in production of peaches and sixth in production of plums and prunes. According to the 2010 Yuba County Crop Report, the top six agricultural commodities in Yuba County are rice, walnuts, plums/prunes, peaches, milk, and cattle, in that order. Kiwifruits, timber, almonds, hay, grapes, and alfalfa are also commonly grown here. 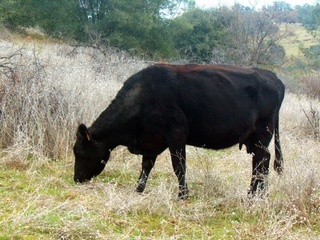 May to August: Friday Night Market

May: Marysville Stampede and Flying U Rodeo