Yuba City is the county seat of Sutter County and is nicknamed "Prune Capital of the World." It is located on the west bank of the Feather River (opposite Marysville, to which it is connected by the 10th Street Bridge and the 5th Street Bridge); south of Berg; north of Oswald; northeast of Bogue and South Yuba City; east of Alemandra; and southeast of Tierra Buena, Nuestro, and the Sutter Buttes. It is bounded approximately on the north and south by Pease Road and Diamond Pointe Way; on the west by Elmer Avenue, Barrett Road, and Railroad Avenue; and on the east by the Feather River.

Yuba City is split between the 95991 and 95993 zip codes. The U.S. Postal Service sometimes lists addresses in Abbott, Berg, South Yuba City, Tierra Buena, Tudor, and Wilson as being in Yuba City, because Abbott, Berg, Tudor, and Wilson are in the 95991 zip code, Tierra Buena is in the 95993 zip code, and South Yuba City is in both. However, on the Yuba-Sutter Wiki, we prefer listing the more specific locations. 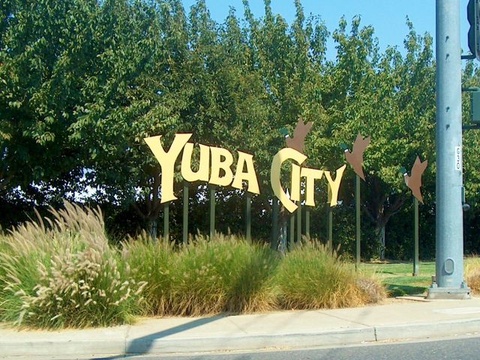 This sign is posted on Highway 20 near the border between Yuba City and Tierra Buena. Photo by queerbychoice. As of a July 2007 estimate1, residents' median age was 32 years.

Of residents 15 or older, 53.1% were married, 23.9% had never married, 12.4% were divorced, 8.0% were widowed, and 2.6% were separated. Yuba City and Loma Rica are tied for the highest proportion of widowed residents in the Yuba-Sutter area.

A Nisenan village, numbering about 100 to 125 people, used to be located in what is now Yuba City. The Nisenan name for the people of this village has been variously spelled Yubu, Yupu, Juba, or Yuba.

Sam Brannan, Pierson Reading, and Henry Cheever purchased the land for Yuba City from John Sutter in 1849 and Brannan, as the senior partner, had the town site laid out and the lots sold to future residents. The first post office in Yuba City was established in 1851, and the town was incorporated as an official city in 1908.2