Ari Weinzweig is co-founder, along with Paul Saginaw, of Zingerman's Deli and the Zingerman's Community of Businesses. 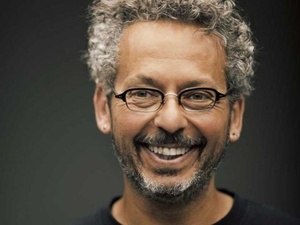 Nationally, Weinzweig has served as a board member and president of The American Cheese Society and as a board member of the Retail Division of the National Association for the Specialty Food Trade. He is a frequent guest speaker in business classes at the University of Michigan and Eastern Michigan University, as well as at various food and business conferences in this country and abroad including the American Institute of Wine and Food, Oldways Preservation and Exchange Trust, the Gathering of Games, and the NASFT Fancy Food Show.

Weinzweig is frequently seen at Zingerman's Roadhouse, usually serving water to customers. "It really just started by me helping out on the floor at the Roadhouse back in the early years after it opened. Pretty quickly I realized that it gave me a great way to actively help the staff, be hands on without being in the way, interact with guests, learn about our food and service quality, train quietly on shift, and gather a lot of information about what was happening in the market."

As of early 2015, Weinzweig lives on the east side of Ann Arbor with his girlfriend Tammie and dog Jelly Bean.

May 2015: Gives University of Michigan spring commencement address, along with Paul Saginaw.

2010: Publishes "A Lapsed Anarchist's Approach to Building a Great Business," It was selected as one of Inc Magazine's 2010 Best Books for Business Owners.

2006: Is recognized as one of the “Who’s Who of Food & Beverage in America” by the James Beard Foundation.

DATE? Serves on the board of The Ark, a nonprofit music venue.

April 1995: Receives the Jewish Federation of Washtenaw County’s first Humanitarian Award, along with Paul Saginaw, for their community contributions.

March 15, 1982: Opens Zingerman's Deli on Detroit Street with Paul Saginaw, two employees, and a $20,000 bank loan. The deli is located at the corner of Kingsley & Detroit streets, in a 1902 building that originally housed Disderide’s Grocery. They originally planned to call it “Greenberg’s Deli,” but that name was taken. They decide on Zingerman’s in part because it starts with Z and will be easy to spot at the end of the yellow pages.

1975: Works at Maude's restaurant in Ann Arbor, where he meets Paul Saginaw.

DATE? Graduates from the University of Michigan with a degree in Russian history.

12 Laws Of Building A Great Company From One Of America's Most Innovative Small-Business Owners – Business Insider, June 23, 2014

How Zingerman's Is Creatively Turning Workers Into Owners Of Its $50 Million Business – Business Insider, June 18, 2014

A Passover Chat with Ari Weinzweig of Zingerman's Deli – Epicurious, 2013

A conversation with Zingerman’s Ari Weinzweig – SmartBlog on Leadership, Oct. 17, 2011

The Corner Deli that Dared to Break Out of the Neighborhood – New York Times, May 3, 2007

The Coolest Small Company in America: Why are high-powered M.B.A.'s getting off the fast track to work for a $13-million food company in Ann Arbor? – Inc. Magazine, Jan. 1, 2003

Articles by Ari Weinzweig in The Atlantic