Ethnic and Cultural organizations are groups devoted to or focused on various ethnic or racial groups within Davis. Following each section is a very brief and general statement to help visitors understand the scope and background of each grouping. Please visit each individual page for a more specific description of each organization's scope and background. 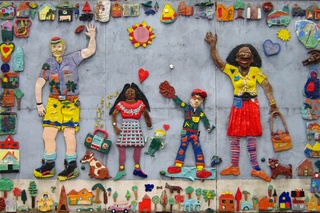 Also please keep in mind that Davis is a small but diverse community; though we may have no Inupiaq groups or Rroma meetings, we do enjoy the diversity offered by people who come from these background. We would encourage you to use the information on this page to borrow facilities in which you might meet.

See also: Student Organizations, under Ethnic/Cultural, for student organizations that may meet on campus and are approved by SPAC.

Native Americans are the indigenous peoples from the regions of North America now encompassed by the continental United States, including parts of Alaska. Native Hawaiians (also known as Kanaka Māoli and Kanaka ʻOiwi) and various other Pacific Islander American peoples can also be considered Native American, but it is not common usually due to their different historical origin (i.e. Polynesian).

Mixed Race is a term used by people who wish to acknowledge their mixed race heritage. The term mixed race is used as opposed to biracial because people may be more than two races. Multiethnic is a term to acknowledge the mixed culture and history they have grown up with. Multiethnic can also be used by people who grow up as one race but identifies with another race's culture (such as a White person who identifies with Hip Hop or Mexican culture).

Currently at UCD, students are allowed to check all of the races they identify with. BUT when the university inputs this info into their system, the student's race with least representation at the school is marked as their only race.