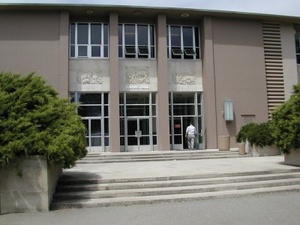 Haring Hall (HARING), located between Hutchison Hall and The Silo, was named for Clarence M. Haring. It was a formerly a strange and mystical place for UC Davis veterinary students before the relocation of Veterinary Medicine to the Health Sciences District. The first floor was lined with vet-med lockers and on the side there were class photos of the vet med and med classes of days long past. Even the ugly bathrooms had lockers in them. The first floor Men's room has an old and dark shower. It also houses 2205 Haring, a very large lecture hall where masses of lower-division undergraduates can take their 16 series math classes or whatever those kids are doing these days. Vet Med Central Services is located in the middle of the building. On the west end of the building, you can find the Word of the Day. Just beyond it lies the lecture hall 1227 Haring.

Haring Hall was built in 1949 as the veterinary medicine facility. It offered ultra-modern laboratories, operating rooms, and a clinic for large and small animals. The building was converted to classrooms for general campus programs after Veterinary Medicine relocated. 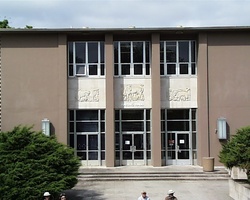 Front view from above street level 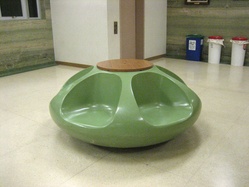 Haring has a awesome anti-social bench on the second floor lobby, it'd be a shame if they removed it during their renovations

Renovations were done on Haring Hall in the years 2010 through 2011. $17 million in state funds were allocated to the 62,000 square feet Haring Hall. The announcement sign read: "Following the relocation of Veterinary Medicine to the Health Sciences District, Haring Hall will be renovated with classrooms and offices for general campus programs".

Haring Hall also served as a home away from home for a number of law school classes during the King Hall expansion construction in the 2008-2009 school year (and probably the 2009-2010 school year, although this isn't confirmed). Law students, peculiar breed that they are, dislike being exposed to campus more than 30 feet away from King Hall, and were generally very upset by this development. Rumor has it, some developed a rash upon exposure to the real world. Those who started the rumor were first sued for defamation and then cooked and eaten.

2010-01-06 19:02:55   I don't have one of those fancy iPhones or other super tiny WiFi mobile devices. So it is difficult for me to find a zone of working WiFi. The moobilenet page says all of Haring Hall is wireless but I'm dumbfounded. I have a class adjacent to the Silo bus stop. Does anyone know where in Haring I might get working signal for those times I show up too early and don't care to travel far? (you know, 10 minutes before class and going into another building or going outside just isn't reasonable, especially on a cold morning). —RyanMikulovsky

2010-11-21 17:00:00   Haring 1227 needs renovations badly. There is a superbly nasty formaldehyde smell. As formaldehyde is a carcinogen, I'd think this would be a high priority to get fixed, but UC Davis' building maintenance ignores all student input and tells professors, "sorry, we're busy." —MyRealName

Well, just to skeeve you more, 1227 Haring is right next door to the gross human anatomy lab. That is to say, they dissect human bodies right through that wall. That's probably what you're smelling... preserved human bodies. Fun fun fun!