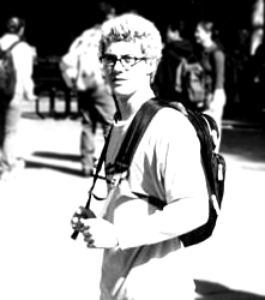 Kalen Gallagher in the quad, Winter of 2003.

Kalen Gallagher was ASUCD President from Winter 2004 to Winter 2005. He was elected to the office of President with 51.2% (2063) of the vote (other two candidates had 37.6% and 11.2%). He belonged to the Student Focus ASUCD political party, is a confirmed member of local secret society Sword and Sandals. As leader of Sword and Sandals he invited a California Aggie reporter to a meeting which lead to an article entitled 'Demystifying Sword and Sandals.'

At King Hall, Kalen ran for President of the Law Students Association in 2007 to raise the issue of a sub-par career services department, but was not successful.

Kalen is originally from San Jose, California and attended Westmont High School. An ambitious young man, he e-mailed all the then-current ASUCD senators before arriving here for his freshman year. When negotiating with Lee Weissman about running on Weissman's "Unite" slate that quarter, Gallagher allegedly informed him "you can have me on your slate or not, but either way I am going to run and I am going to win."

Gallagher subsequently served on Senate from 2001-02 (winning a seat his Freshman year), Vice President 03-04, and President 04-05. So far the only time he has not been an ASUCD elected official was during the months between the end of his Fall quarter term and the winter election in which he was elected Vice President.

He is also believed to have invented campaigning via AIM, establishing several accounts every election compiled of every available screen name of students at UCD and mass messaging them.

In his farewell statements as ASUCD President, Kalen stated "When you're in elections it's easy to continually think about all the different slates and independents." He said "You shouldn't worry about what ticket you're on once you're elected. Just work together. We're all Aggies and that's a strong thing to have in common." Gallagher also voiced his opposition to the Choice Voting system. 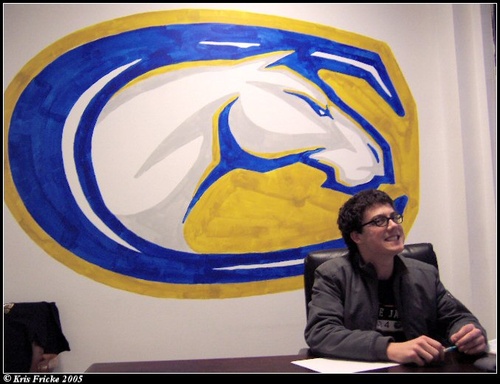 Kalen in his office. Whatever else one can say about him, he has decorated his wall more awesomely than any other officer in this writer's memory. He painted that Aggie logo himself using a projector as a guide.

He has long, shout-out filled, and frequently changed away messages on AIM. He uses away messages the way a lot of people use LiveJournal. Kalen is an emeritus member of the prestigious Varsity Facebook Team. Basically, he's really popular.

Kalen was also a summer advisor for two years and a member of the Fraternity Sigma Phi Epsilon.

He is spent the Winter 2006 quarter in the Washington Center Program where he interned for the Democratic Congressional Campaign Committee.