The ASUCD Senate consists of 22 elected and non-elected students who collectively adopt and manage the association's 17 million dollar budget, considers bills and resolutions and individually and jointly undertake various projects designed to enhance the quality of life for students on campus . Senate meetings are open to the public, and usually held every Thursday during the school year, in the Mee Room (3rd floor of the Memorial Union) starting at 6:10pm. Minutes and agendas of each meeting are typically available in SGAO (3rd floor Memorial Union) and online on the documents section on the ASUCD website.

Since the beginning of the COVID-19 pandemic, ASUCD Senate meetings are held as Zoom Webinars, information of which can also be found on the ASUCD website.

As for elections, all undergraduate students at UCD can vote for anyone they want. In addition to independent candidates, there are "slates" here at UC Davis — akin to political coalitions that dissolve after each election cycle. Prior to the dissolution of slates in Winter of 2020 the table composition consisted of the following slates:

See Senate History for historical information, or see Slates for newly formed, inactive, or past slates that do not currently have elected officials.  If you are interested in running for Senate and don't know much about the process, this could be a decent resource.

The Senate is responsible for voting on and creating bills that say how ASUCD should operate. Senators are additionally able to pass resolutions asking University administration to address an issue or to suggest the implementation of a change. Senators vote to approve or reject the President's proposed budget each spring. Being a Senator is a very important job because of the sheer size of ASUCD. Also, ASUCD Senators and other executives are often invited, through the University, to various important social and political functions. An example of this is the summer 2005 function "Perspectives on Poverty", which featured Colin Powell, John Edwards, and John Ashcroft.

In the past senate seems to have had a bit of an attendance problem. This led 4 past senators to write a letter to the editor in the Aggie.

Senators also hire staff, who serve as volunteers to understand the workings of the Senate table and skill-build. Despite the fact that these are always advertised in elections as qualifications, they are typically sinecure offices.

Due to recent elections reforms, no slate possesses a majority. In the event of a tie, Vice President Eden, holds the tie-breaking vote. 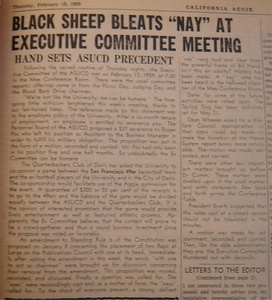 The ASUCD Senate has generated some interesting scandals recently. These include: 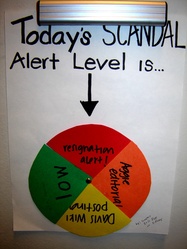 The original Scandal Meter, Fall 2005 The Elections Committee is responsible for elections matters. The Senate is elected using the Choice Voting method.

See ASUCD Elections for more in-depth information on past elections.