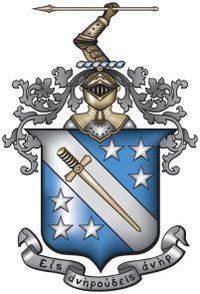 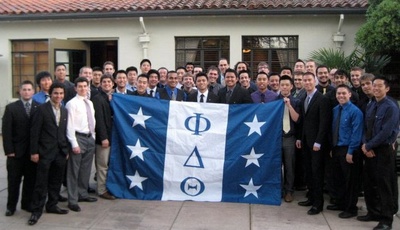 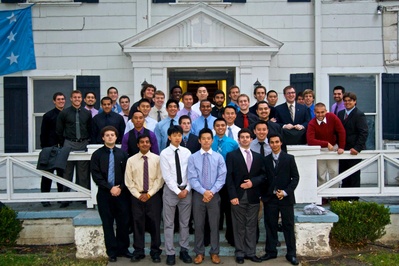 Phi Delta Theta is a fraternity organized with three principle objectives: the cultivation of friendship among its members, the acquirement of a high degree of mental culture and the attainment personally of a high standard of morality. Phi Delta Theta looks to establish itself as a positive force in the lives of its brothers and the community in which it resides. The newly re-chartered fraternity is seeking to establish a positive reputation and improve the public perception of the Greek System at UC Davis as a whole.

Phi Delta Theta is actively engaged in giving back to the community in an number of ways. One is with its ongoing project named Friday Afternoon Rectitude Time. On Fridays you will find members of Phi Delta Theta working in the garden of the United Methodist Church on Anderson. There, in the community garden, Phis grow and harvest crops that are donated to the Food Bank of Yolo County. This past Halloween, the fraternity turned their chapter house into a haunted house, and raised money for local schools. Phi Delta Theta also is involved year-round in raising money for it's national philanthropy ALS (also known as Lou Gehrig's Disease, named after an alumnus of the fraternity).

While doing all of these things, Phi Delt still find the time to have fun finding time by keeping an active social calendar by throwing parties and mixers with various other Greek and non-Greek organizations.

Phi Delta Theta recruits only on the first two-weeks of the Fall, Winter, and Spring Quarter. However, the fratenity is always looking for quality men who are looking to gain leadership skills, become the greatest version of themselves, and make the most out of their undergraduate career. If you are interested in joining Phi Delta Theta, an "interest sheet" must be filled out - Phi Delta Theta can best be reached via Facebook or their website.

Phi Delta Theta is a part of the Inter-Fraternity Council and is a strictly anti-hazing fraternity - Phi Delta Theta believes in building its members up, not breaking them down. 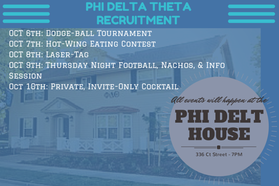 Phi Delta Theta opens up recruitment and membership opportunities in the first two weeks of each quarter.

However, Phi Delta Theta is always accepting "interest sheets" from UC Davis students who are interested in joining the fraternity and who want to become leaders on campus. 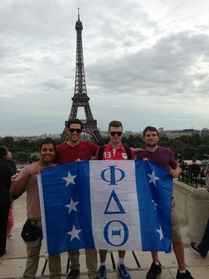 UC Davis Phi Delts in Paris Phi Delta Theta prides itself as a leadership fraternity, and it has a strong presence in ASUCD, especially in Picnic Day. However, you can find its brothers all throughout campus including: UC Davis Football, Rugby, Camp Kesem, Sports Clubs, Intramural Sports, and a large variety of other student clubs and organizations.

Additionally, the chapter has the most extensive alumni network at UC Davis reaching back even to it's pre-Phi Delta Theta days as the Calpha Fraternity. Phi Delta Theta alumni are extensively engaged in the chapter's current activities as advisers and mentors to the brothers.

The Phi Delta Theta alumni association recently raised over $1 million for the rebuilding of the new house. Due to an extensive and well-organized alumni network, undergraduate Phi Delts are known to receive quality internship opportunities because of the various leadership experiences offered within the fraternity.

One notable alumni from the early years of the fraternity is Colby 'Babe' Slater, gold medal winner in 1920 and captain of United States Rugby Team at the 1924 Olympic Games. NFL Quarterback J.T. O'Sullivan is a former president of the California Epsilon chapter.

Phi Delta Theta is a diverse organization, and its brothers come from many different ethnic, racial, and socioeconomic backgrounds. Many different religious and political beliefs are represented as well as a variety of lifestyles. The Fraternity feels that a diverse brotherhood focused on the three principle objectives is beneficial to the development of its members as well as providing a global perspective while living in Davis. 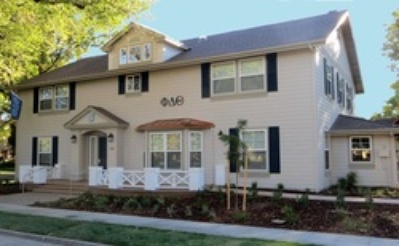 The Chapter's House at 336 C Street

UCD's chapter is located at its 336 C St. house. The Fraternity owns one of the largest houses in the city located in the middle of downtown, walking distance from Campus, right across from Central Park, and adjacent to Yolo Berry Yogurt. The house was originally built as a church in the late 19th century, and was soon bought out and expanded by the Fraternity. The house also sports a large backyard, which the fraternity uses for sports and other events.

The house is unique among the Greek system in that it is a "dry" house - no alcohol is stored or consumed at the Phi Delt house (this is a national policy that has been in place since 2000). This, along with the fact that the Fraternity owns the house, allows for a cleaner house with less maintenance requirements, as well as lower insurance costs for all its members. Partially because of this, Phi Delta Theta prides itself as one of the most affordable, social fraternities on campus without compromising the ability to have amazing events. 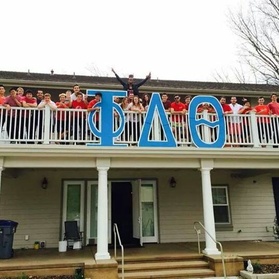 Phi Delta Theta, Spring 2014 On October 28th, 1912, students at the University Farm founded the Calpha Agricultural Fraternity- an organization that would eventually evolve into the current California Epsilon Chapter of Phi Delta Theta. Calpha was one of the original eight fraternities founded at UC Davis, back when the university was an extension of Berkeley's Farm School, and is the only one of those original eight still in operation today. In 1914, the fraternity purchased the property at 336 C St., which the Fraternity still owns today. The Calphas expanded the house to its current size during the late 1930s. When the campus closed during the Second World War, so did the fraternity, and the house was temporarily converted into a barracks for the US Army Signal Corps who used the campus during that period.

In 1954, Calpha was the last of the local fraternities to have survived and retained its independent status. However in face of growing competition from the presence of the Greek-letter fraternities, the Calphas decided to affiliate themselves with a national fraternity. At the time, the University had placed a moratorium on new fraternities on the campus, and so Calpha was the only opportunity in the near future for a fraternity to establish at UC Davis in the forseeable future. After much deliberation and proposals from a number of Fraternities, Calpha decided to become the California Epsilon Chapter of Phi Delta Theta.

In 2000 a member became the first UC Davis student in 95 years to die of alcohol poisoning. At this time, the chapter was already on campus probation for drinking and hazing problems. Eventually, in 2006, the charter was pulled (a member cited financial issues as the reason) and the chapter was officially closed.

During the 2010/2011 academic year, Phi Delta Theta's Expansion Director at the General Headquarters decided to start up again with an entirely new group of men. During the fall of 2010 Phi Delta Theta had 14 members when it was an interest group. In spring of 2010, Phi Delta Theta colonized with 52 members. On November 12, 2011, Phi Delta Theta received its charter back marking a full return of the fraternity. As the fraternity approaches its 100th anniversary on the Davis Campus, the newly re-established chapter boasts a large, involved membership, an active and supportive alumni network, and is looking forward to a bright future on the Davis campus.

In September 2012, the fraternity tore down it's house in preparation for the construction of a new chapter house. See the aggie article here.

2006-07-21 17:44:52   During HB2K5 when the MedEvac Helicopter was landing on Slaughterhouse Island to give emergency care to the person who drowned, all of the boats respectfully and somberly stopped the music on their boats and kept hardcore partying to a bare minimum during the crisis. All that is except two boats docked very close to ours who just happened to be the Upstanding Gentleman of this house. I have never been so ashamed of another person or the Greek system in my life. Haven't met any since then but the ones I did meet. egh... —JonathanNasca