A wide variety of the legless reptiles we either love or loathe live in Davis and the surrounding countryside. Snakes are part of the natural town wildlifeand play an important role in the ecosystem of Davis and it's outskirts. The Davis environment straddles the general path of Putah Creek, an important corridor between the Coast Range of Northern California and the Sacramento Delta. The riparian habitats along the creek, the adjacent oak woodlands, the wetlands of the Delta and the interspersed grasslands combine to provide a variety of habitats for several snake species. Snakes are generally helpful in controlling Rodent populations.

Most of the time, the presence of snakes goes undetected by people. They spend very little time out in the open during daylight hours. Instead they frequently adapt to utilizing nocturnal activity periods and spend a good deal of time under surface cover. This habit of living under wood, rocks, leaf litter, etc protects them from predators, allows them to effectively thermoregulate their body temperature and puts them in closer proximity to their primary prey items. Their cryptic behavior lends to the reality that there is very little known about the natural history of many snake species. Amateur reptile enthusiasts have contributed much to what we know about the distribution and natural history of snakes in North America.

Interesting variations in color patterns of both Kingsnakes and Gopher Snakes occur in our area. There is one rare snake species found in the wetlands east of Davis. 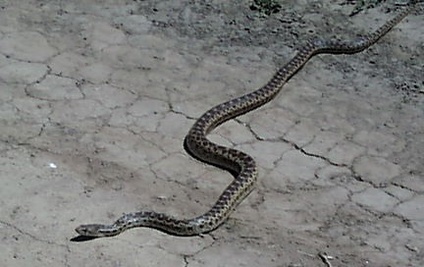 A Gopher Snake on the UC Davis campus

Gopher Snakes (Pituophis catenifer) are our most common species of snake in the Davis area. Our local subspecies is the Pacific Gopher Snake (Pituophis catenifer catenifer). They are a resilient species, and still survive in some of the few remaining vacant lots and more wild open space areas in the city limits and on the UC Davis campus. They remain numerous in the agricultural areas of Yolo County and along Putah Creek. The typical pattern is a series of dark blotches on a tan background. An uncommon striped phase occurs in our area. The usual blotches are diffused into a striped pattern.

A snake's skin does not grow in the same way our skin grows. When they have become too big for their skin, they will shed their old skin, after having produced a new larger body covering. Prior to shedding, the scales become opaque. This is especially noticeable in the scale covering their eyes. Thus a cloudy eye is a signal that that snake is about to shed it's skin.

Gopher Snakes superficially resemble rattlesnakes and will mimic rattlesnake behavior, presumably to ward off would be predators. They will raise their head, draw it back and widen the jaw area in a surprisingly accurate impression of a rattlesnake head. To complete the deception they will hiss audibly and rapidly shake the tip of their tail, sometime on the ground or in dry leaves, creating a sound that could be interpreted as a rattle. Here's a video of one making a rattle noise just by "hissing". Despite all the drama, gopher snakes are harmless and provide an important function in our ecosystem. They should be both respected and protected.

They have a tendency to lay out in bike paths and roads, so be careful not run over anything that looks like a stick. One snake in particular has been frequently hanging out on the bike path along Anderson near the Arlington intersection. 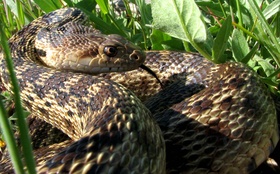 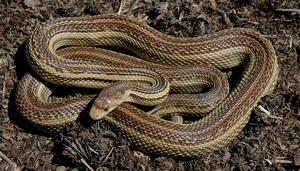 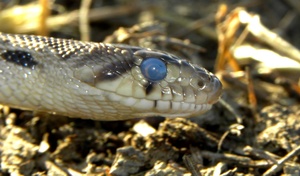 Gopher Snake about to shed it's skin. 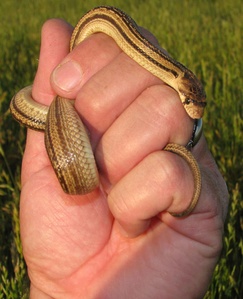 Another specimen of the Striped phase of Gopher Snake 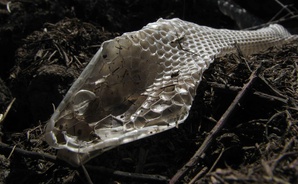 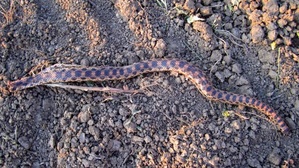 Caught by hawks in West Davis 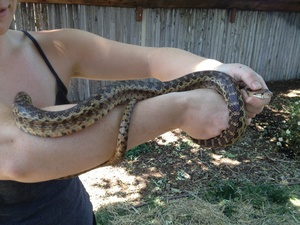 Got stuck in a backyard in West Davis 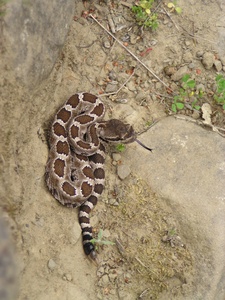 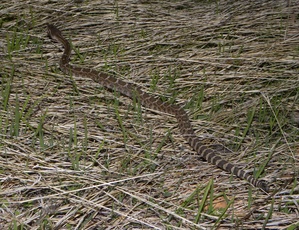 Rattlesnakes rarely occur in the Davis area. Rattlers have occasionally been caught on campus. It is thought that rattlesnakes wash down Putah Creek and the Yolo Bypass during heavy flows, temporarily expanding their range. These do not seem to result in viable, reproducing populations of rattlesnakes in either area.

Our local Rattlesnake species is the Northern Pacific Rattlesnake ("Crotalus oreganus oreganus"). These animals are common in the Coast Range west of Davis. They are frequently seen on roads in the early evening in the Spring and Summer months. There is quite a bit of color variation amongst both juveniles and adults.

Rattlesnakes are pit vipers, a group of snakes which have heat detecting sensors located within pits on their head. They use this heat sensing ability to find prey.

The "rattle" is found on the end of the tail. It consists of loosely interconnected segments of keratinous material, one segment developed from the skin during each growth period of the animal. Each segment is deposited when the snake sheds it's skin. Thus, the number of rattles is indicative of how many times the snake has shed it's skin, not the age of the snake. The rattle behavior is used as a signal to would be predators that this animal is dangerous. Humans best heed this warning. These serpents are poisonous and should not be handled. 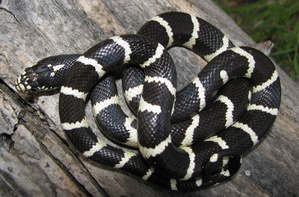 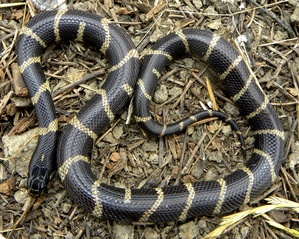 Delta Banded Black Belly morph of the California Kingsnake found at the Yolo Bypass Wildlife Area Another, less common snake in our area is the Common Kingsnake (Lampropeltis getula) which lives in a variety of habitats in open areas around Davis. They may still exist in the city limits in remaining open fields. Kingsnakes are found throughout the country, with many variations in color and pattern. The subspecies in our area is known as the California Kingsnake. An interesting "Delta phase" can be found in our area which exhibits a more diffused banding pattern. Other Kingsnakes in our area may show thin bands, giving the snake an overall darker appearance. This phase is sometimes described as the "Delta Banded Black Belly" morph.

Kingsnakes will sometimes mimic the behavior of rattlesnakes by rapidly shaking their tail, similar to how a rattlesnake will create a rattling sound. This behavior can be viewed on this short video shot on the Yolo Bypass Wildlife Area in early November, 2009. 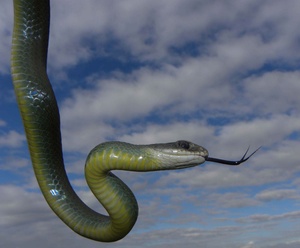 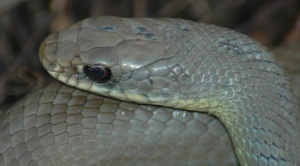 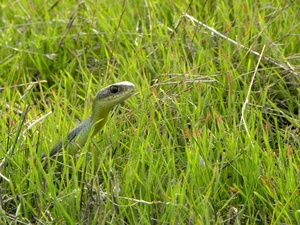 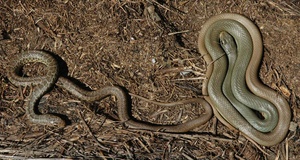 Grasslands in the area are home to the Yellow-bellied Racer (Coluber constrictor), a swift, slender serpent that feeds on lizards, birds and rodents. They actively hunt with their head high above the ground, moving it from side to side when seeking prey on the ground. They will climb trees in search of birds.These snakes range from a greenish gray color to an iridescent lime green color with a colorful underbelly.

Interestingly, the juveniles look like a completely different species, displaying a pattern of blotches on their sides and a banding on the dorsal part of their body, superficially resembling a young gopher snake. Before modern field guides were in wide use, many amateurs believed them to be an entirely different species. They lose this pattern in their first year of life.

These snakes can be quite large, with large specimens approaching six feet in length.

There are probably not too many Racers left within the Davis city limits. 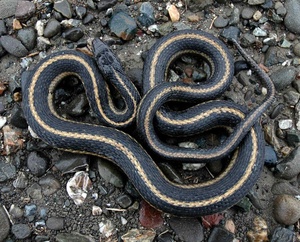 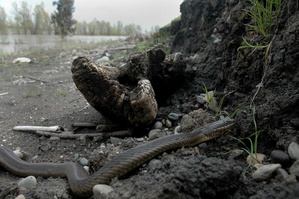 Giant Garter Snake in the Yolo Bypass. The Giant Garter Snake Thamnophis gigas, is a threatened species that is found in wetlands and irrigation canals at the Yolo Bypass Wildlife Area. This serpent can reach lengths of over six feet long. Once common throughout the Central Valley, they are now restricted to smaller populations scattered across a more restricted geographic area.These animals are the most aquatic of the garter snakes, feeding on fish, invertebrates and amphibians. They usually lack the characteristic reddish stripes found on other garter snake species. They spend the winter months in underground burrows. 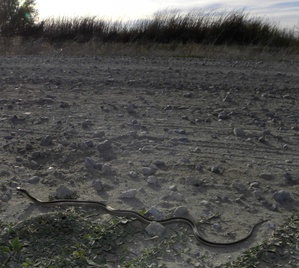 Valley Garter Snake active on a road in the late afternoon in the Fall. 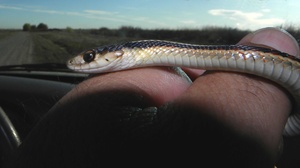 Valley Garter Snake in the hand 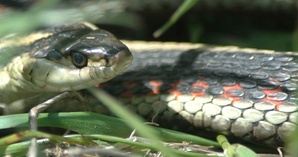 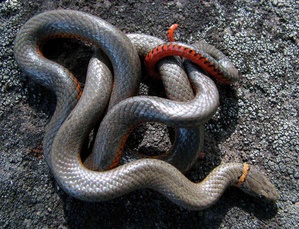 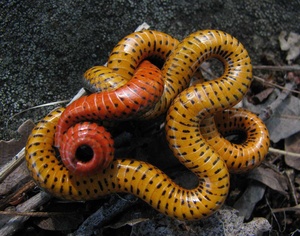 Underside of same snake. A small snake found along Putah Creek and in our local hills is the Ring-necked Snake, Diadophis punctatus. This beautiful snake feeds on insects, small lizards and salamanders. They are rather cryptic, spending a lot of their time under rocks and plant debris. The underside of these critters are a beautiful orange color, presumably to fool predators into thinking they're venomous.

Please do all you can to avoid hitting them 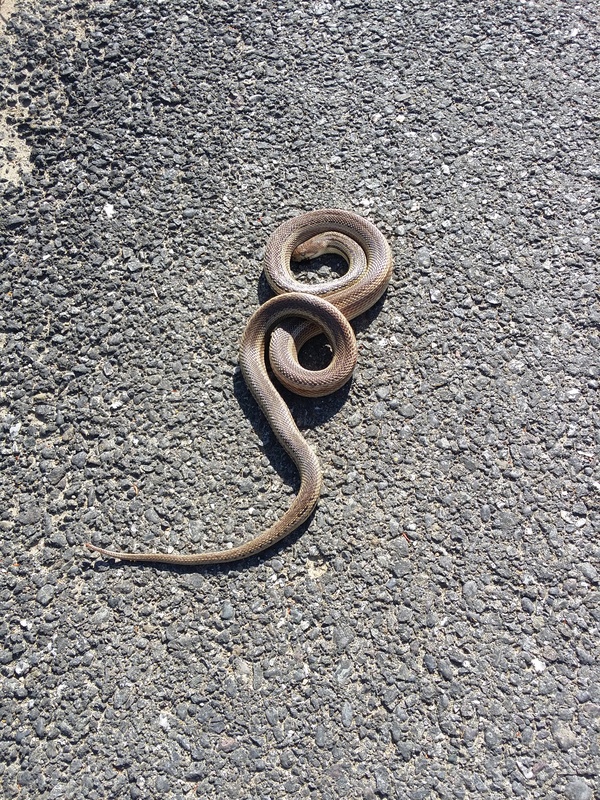 Dead snake at road side in most amazing "Endless knot" posture, near Lake Solano,
May 18, 2016, photo courtesy CO

2010-05-31 21:47:09   In the last 2 days I've seen two gopher snakes and one yellow-bellied racer. All three were big healthy specimens and were on or near the greenbelt in Mace Ranch. These are the first snakes I've seen in years. —JimStewart

Weird. It must be snake season. I saw a snake yesterday and other people I've talked to have said they saw snakes yesterday or today. Maybe they are just so happy that the weather has finally turned warm. The snakes, that is. —CovertProfessor

2010-06-02 14:53:03   I saw a good sized 4 foot Garter snake on the Wild Horse agricultural buffer last Wednesday and then again yesterday. It could have been the same snake or a different ones the same size. —DagonJones

2016-05-21 23:34:53   I have been cycling a lot from the beginning I started living in Davis. But this year, I have seen an unusual amount of dead snakes on the road and road ride, to be precise: this last month. In my opinion, it is an unusual active snake season, the most active since 5 years. It's very sad. I came across two that were still alive. One already was safely on the road side, the other still was on the middle of a road. I waited until she returned to a ditch. I will upload a photo I made a couple of days ago of a dead snake, very close to Lake Solano. When I took the photo I thought she maybe still was alive, but she was as dead as they come. :-( It was in the most beautiful and amazing posture you can imagine. It broke my heart. These are beautiful animals and important in nature (as all are), I wish car drivers would pay more attention and do all they can to avoid hitting them. —ConstantiaOomen

2016-07-16 00:13:06   I have been hiking around Putah creek for 30 years and have a keen interest in snakes. One snake not mentioned above is the rubber boa. I once spotted one around 15-20 years ago close to the railroad crossing. I was very surprised to see it but it was immediately obvious that it was a boa. I had no idea at the time that snakes in the boa family were even present in california let alone along Putah creek. It was rather small-around one foot or less. Unfortunately. I have not seen one since. That might not be entirely surprising as they are primarily nocturnal. I wonder if there are any still around. —Robertw