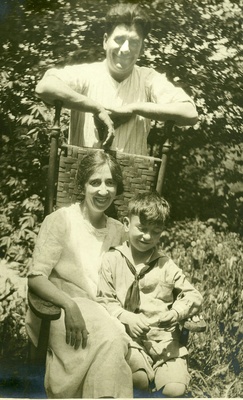 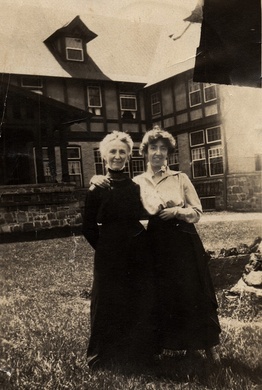 My family history has many connections to Adirondack Sanatoriums, Stony Wold in particular. My Grandmother, Sarah Gifford Griffiths (1858-1927), was a patient at Stony Wold in 1905. My Mother was a patient at Stony Wold in 1914. In 1915 my Father was working on the dairy farm in Stony Wold, New York. My parents met, married and then moved to Syracuse in 1916. I was born in Syracuse, N.Y. the son of Howard Davies (1888-1925) and Grace Griffiths Davies (1891-1980). My Father worked as an engineer for the New York Central Railroad in Syracuse. He developed TB in 1922 and the family returned to the Adirondacks - Saranac Lake, New York. 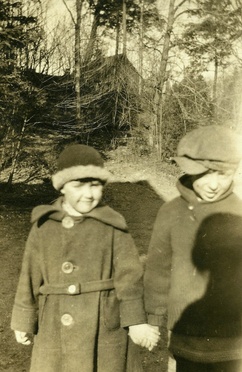 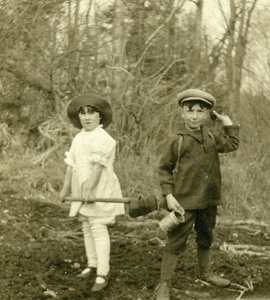 Ethel Wilsey, Sherwood Davies, digging for wormsMy Father was admitted to Ray Brook Sanatorium and my Mother sought employment. She was hired at the Post Office and store at Stony Wold on Lake Kushaqua. This is where she had been cured of TB just eight years prior. The Stony Wold Postmaster had just died and my Mother was fortunate to be appointed Postmaster in 1923, a position she held until 1958. My Mother was provided room and board. I boarded nearby on the Stony Wold grounds with the Wilsey family as there was no available living space to stay with my mother at the Sanatorium (Stony Wold was for women with TB). Mr. Wilsey was the grounds superintendent of Stony Wold and was provided housing for his wife and two daughters, Bernice and Ethel. Stony Wold Sanatorium was located on Lake Kushaqua on the Adirondack Division of the New York Central Railroad. There were at least four trains that operated daily between Utica and Montreal.

The Delaware and Hudson operated trains between Saranac Lake and Plattsburgh with a station (flag stop) at Lake Kushaqua. The station was about ½ mile north of Stony Wold and at the North end of the lake. In the early 1920’s the dirt roads between Loon Lake, Lake Kushaqua, Onchiota, Vermontville and Rainbow Lake were narrow and one way in many areas. In the 1920‘s it was often utilized by bootleggers to avoid the Revenue Agents.

Residents at Stony Wold were always interested in visiting sites where Revenue Agents were successful in their endeavors. In 1930 a large Buick touring car was being chased by the Feds and it left the road turned over a few hundred feet from the Kushaqua Dam. Kushaqua residents visited the site finding no intact bottles but a lot of glass. The driver escaped through the woods and rumor had it that he returned to his residence in Gabriels. This is the type of excitement that we enjoyed in the 1920’s and 1930’s.

Stony Wold SanatoriumThere are many memories of the time frame 1923-1950. Elizabeth Newcomb, founder of Stony Wold, spent her summers at a camp on the Lake and the winters in New York City. She was transported in a straight eight Packard car and chauffeured between Lake Kushaqua and New York New York Central every spring and fall. 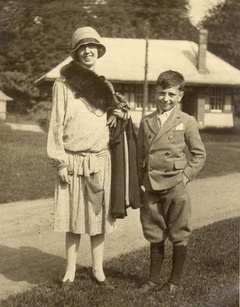 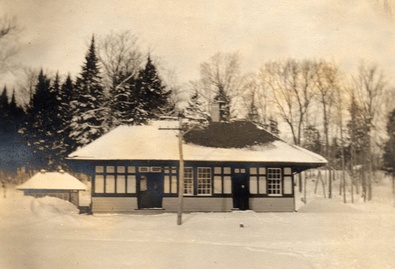 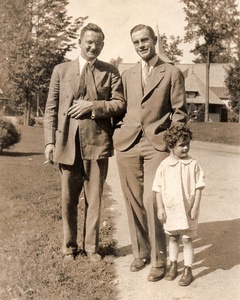 Dr. Havey Powers, Dr. Ezra Bridge, Ruth Jane PowersIn the early 1920‘s the Stony Wold Saw Mill was still operational. Trees were felled on site, towed to the sawmill, and the lumber was used in the construction of the San and a number of buildings for housing employees. An on site generator produced electricity until the mid 1910’s. 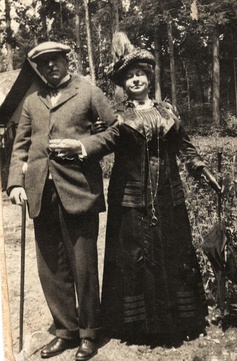 Dr. James Newcomb, Sarah NewcombIn the late 1920’s the State required pasteurization of milk. Stony Wold abandoned the dairy farm and purchased milk which was shipped by rail. The community operated a local telephone system and everyone knew the phone being called by the number of rings. Listening into conversations was not unusual. Communication with the “outside” world was via one telephone located on the 1st floor of the Sanatorium. 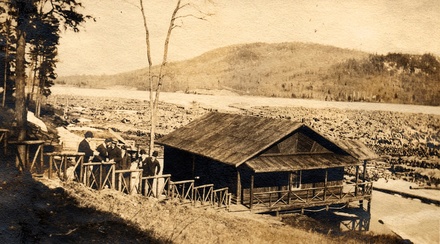 Floating the Logs on Lake Kushaqua Depending on the patient's condition they might be bedridden or be able to be up and around. During the course of recovery the patient would be given a recovery schedule. There were signs on the Onchiota dirt road indicating five minutes, ten minutes, and up to 60 minutes. Based on the patient’s condition the Doctor let the patient walk morning and afternoon for a designated time and distance. 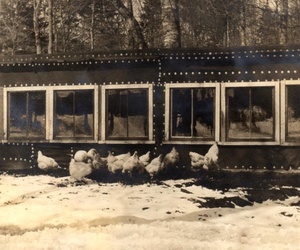 The Stony Wold HenneryThe original Sanatorium building had no elevator, modern laboratory, or modern X-ray equipment. In the late 1920’s a three story addition was built, which provided additional rooms for a solarium on the third floor, more rooms for patients o 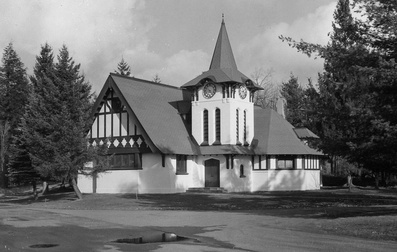 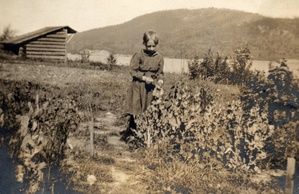 Entertainment was limited. No TV. Generally received the best reception from Canadian radio stations. Amos and Andy was a popular program. Movie film was sent from New York City and arrived on the 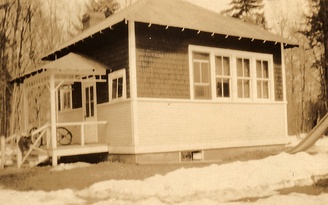 Kushaqua School6:30 PM Wednesday train for showing that night in the chapel for Staff and Patients. Generally there was a full house. Many Westerns – Hoot Gibson, Tom Mix and others. Not many love stories. There were limited areas to throw a football or a baseball. One area was in the road near the railroad Station and Chapel. Males of all ages might participate. One afternoon a few of us were throwing and kicking a football. Lo and behold if one of the adults didn’t kick a football through the Tiffany Window in the Chapel. I guess we were forgiven when the powers to be learned it was Mrs. Newcomb’s driver. Oh well what we r 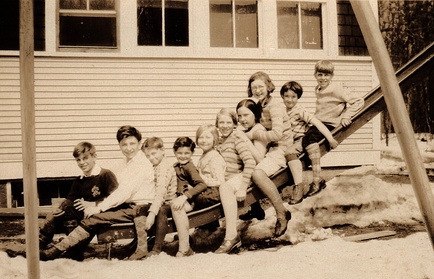 Kushaqua School, c. 1927.  Left to right: Jack Wilson, Sherwood Davies, unknown, Ruth Jane Powers, unknown, Lillian Wilson, Ethel Wilsey, Marion Turner, unknown, and Stanley Wilsonemember. During the depression money was scarce and putting food on the table for the family was important. The meat from a 150 pound deer would feed a family for some time. Jacking involved shining a light in a deers eyes and the hunter then shoots the somewhat blinded deer. The narrow dirt roads in the area was conducive to “hunters” jacking for deer from cars. Gunshots heard at night were probably the “illegal hunters” out jacking for deer.

One local hunter after the first snowfall in the Spring would put out hay in an open area and then wrap himself in a white sheet to become less visible and approach a deer feeding on the hay. That same hunter was caught by the game warden while jacking deer. Many interesting stories!! 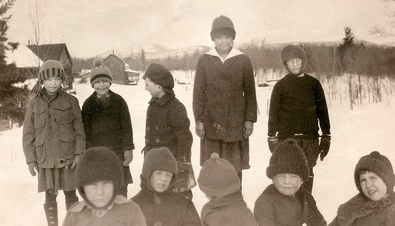 School children.  Sherwood Davies is in the back row, facing his neighbor.Children of employees went to a school built in about 1915 located about 1/4 mile away on the Onchiota Road. There was one teacher for 10 to 15 children in 1st through 8th grade. The last teacher was Miss McDonald who later became Mrs. Perley Jacobs.

In the 1920’s rural education (1st thru 8th grade) was usually provided at the local level i. e. small one room schoolhouses. Sanitary facilities involved a well usually located outside the building and an outside privy or a chemical toilet located inside the building. In 1923 I boarded with Hayden Tormey’s (the so called Mayor of Onchiota) Father and Mother. Went to the school there for a few months. They had about 20 students and I was the new kid on the block trying to learn the routine. They had a chemical toilet . If you had to urinate you raised your hand with one finger. For a BM you raised two fingers. I dutifully raised two fingers and was granted permission. I went in pulled down my pants and sat on the toilet. As soon as I did, something hit me in the fanny. I jumped up opened the door and went into the classroom with my pants down to everyone laughing. What apparently happened was that a bird got into the outside vent and when I lifted the seat the bird flew into me as it saw daylight. O 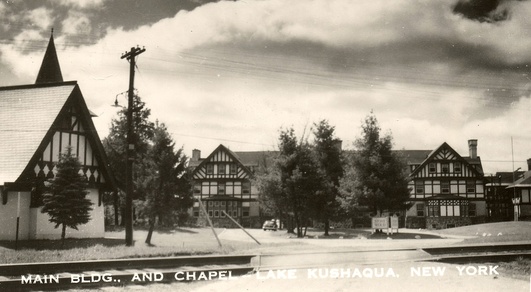 h well, I was still reminded of this years later, and obviously haven’t forgotten the memory.

Bus service for high school students was provided beginning in 1932. Ike Skiff, of Onchiota, was the driver for many years and picked up three students at 7AM from Lake Kushaqua, five from Onchiota and five from Vermontville. The bus returned the Lake Kushaqua students at 5PM. It was a long, long day.

I was bussed to Saranac Lake High School from 1931-1936. A few memories. Miss Seymour had Junior High Study Hall and Mrs. Benham had Senior High Study Hall. We received our grades and every quarter students would be reassigned to their seats by their grade point average. The top students would be assigned a seat in the back row and the students with the lowest marks were in the front row. Remember Dean Towner and Ellen Dean as always being in the back row. 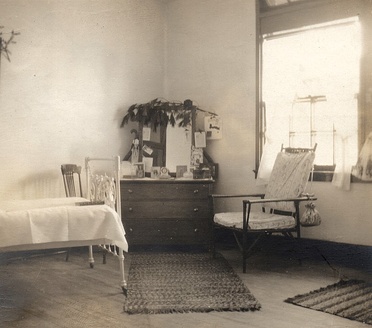 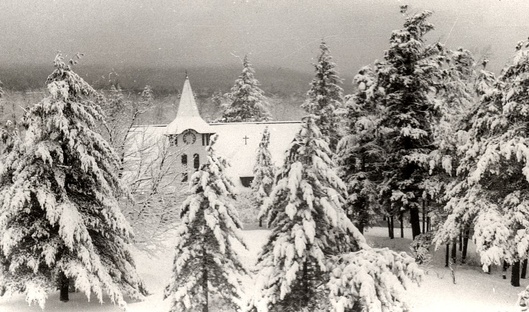 In October 1937 of my Sophomore year at RPI, I developed a cold followed by a cough. I checked with the MD and he confirmed TB. I returned to Lake Kushaqua started bed rest in a room above a 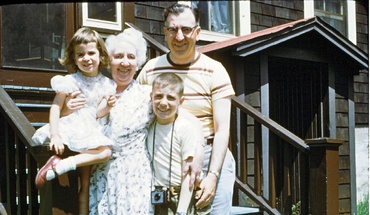 Deborah Davies Gordon, Grace Davies, Sherwood Davies, Howard Davies, in front of Kushaqua Post Office, 1955store and PO at Stony Wold. I was given permission to return to RPI in January of 1938. Lucky.

I returned to Lake Kushaqua in the summer of 1938 which was in the middle of the Great Depression. Money and jobs were scarce. I took a job at the San delivering trays and washing dishes for $30 a month which included room and board. After graduation from college I returned to Stony Wold many times to visit my Mother until her retirement in 1958. For my 94th birthday gift I returned to my roots-- Lake Kushaqua and the site of Stony Wold, to find only the chapel and bountiful memories remain. 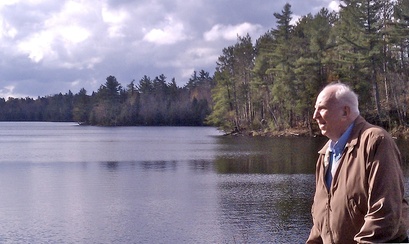 Sherwood Davies, standing on the bridge on Lake Kushaqua, 1994