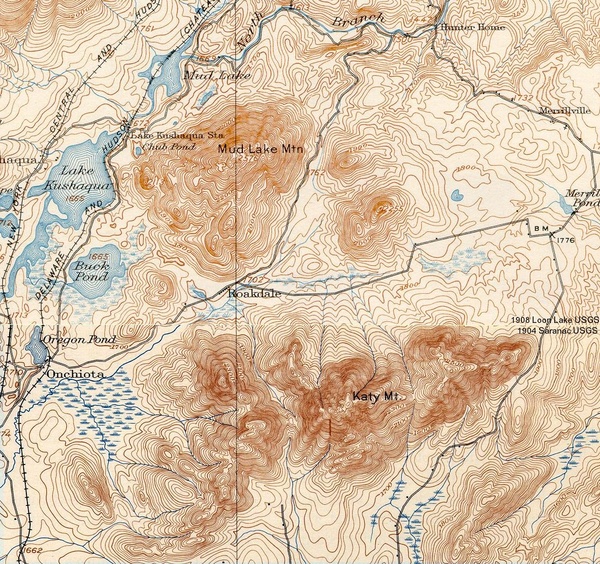 Roakdale, on the 1904/1908 USGS maps.
The road through Roakdale, then called Roakdale Road, is now Franklin County Route 60.
The road that runs north to Hunters' Home no longer exists, though it can be seen on satellite images.Roakdale was a settlement near Onchiota and Rainbow Lake founded in the mid-1800s. It had a sawmill, school, tavern, boarding house, and a two-mile long, narrow gauge railroad that operated from 1887 to 1895. It was named after John Roak. After the early twentieth century fires, it became a dairy farm and eventually a Christmas tree farm. The first legal deed was issued in 1891.

Lane Knight lived there until 2006.

I think it is safe to say that the most of the people who travel the road between Onchiota and Merrillsville notice the little pond a short distance west of the Knight residence (more familiarly known as the Somers place). But I imagine there are only a few of those people who know — or could imagine, that there was once a busy little community there.

The community was known for many years as "Roakdale", so named because a man by the name of Roak built and operated a saw mill there, and as the spot lies in a valley, or dale, "Roakdale" was the natural name for the place.

When L. H. Somers, who was then head master of the Adirondack-Florida School at Onchiota, bought the place about 1915 he renamed it "Rockdale". Some of us who have known it only since it became "Rockdale" so call it, but the older people who had been familiar with the place for years, still call it "Roakdale", and I have found myself corrected by some when I have spoken of it by its' newer name.

Mr. Somers kept a resident, working manager on the place and operated it as a dairy farm for a number of years (my husband and I were there for two years) furnishing milk and cream to the Adirondack-Florida School for the most of the time, and also to Stonywold Sanatorium at Lake Kushaqua for several years. Later he closed out his farm business, and used the place only as a summer home, and still later sold it to Frank Knight, Jr., who is now raising Christmas trees on the fields that were farmed earlier.

It is hard to realize that those same fields were probably once covered with heavy forest, as were the slopes of the hills, and the near by mountains. But I suppose that is why the mill was built there in the first place — to convert the logs from those trees into lumber, and so into money.

The mill was across the road from the pond, and down the hill a ways from the road. It is hard to realize that a mill could be run by water power from a stream that flowed from the little pond, for the pond is gradually filling, or drying up. It is much less than half the size it was when I first knew it, nearly forty years ago. Then there was a small outlet stream flowing across the road. But it is not often there is any overflow from the pond now.

To expedite the shipping of the lumber from the mill Mr. Roak built a narrow-gauge railroad from the mill to Onchiota, a little less than two miles.

With the mill came workers who needed to live near their work, and so a small settlement soon sprung up around the mill.

A family by the name of Wilson had a boarding house with a large dining room which seems to have been the gathering place for the community's good times.

The Hodges had a dairy, how large I don't know. Every family kept a cow, at least one pig and a flock of hens, and no doubt there were plenty of dogs and cats.

Names of some of the families who lived there were: Meyers, Pudvah, Puryea, Amell, Odell, Dupell, Rule, and there were at least two other families whose names have been forgotten. There was also a school house. The community had no stores and the nearest ones, or at least the ones which seemed to be the handiest for the people to trade at, were at Bloomingdale, and the most of the Roakdale inhabitants traded at Barnard's store.

In the summer of 1895 Miss Grace Porter, 16, of Nashau, N. H. came to Roakdale to visit her sister. Mrs. John Dupell. It wasn't many weeks before she and a twenty-year-old employee at the mill were in love, and on Nov. 4th. 1895 they were married. This would not be significant except that a wedding dance was held in the Wilson dining room that evening. And many who lived in Vermontville, Bloomingdale, and Onchiota, etc., wanted to attend the dance and how to get there presented a problem.

It had been many weeks since a train had run over the track from Onchiota to Roakdale, and neither the track nor the train was built for passenger travel, but youth can most always find a way to accomplish its desires. So some of the boys looked over the track, while others went over the engine and a flat-car or two, and at the appointed time they set out for Roakdale with Levi Bushey, engineer, at his post at the throttle. The crowd, (a good portion of the more than two hundred that attended the dance) were at their noisiest, for they "tooted the train whistle, hollered and sang all the way, both to and from the dance." Some of the young men who were present were Sid Barnard, Nate Barnard, Ralph Towne and Dr. Noble, all of Bloomingdale.

It's not often that a train makes a special run to help a young couple celebrate a marriage, but that is one of the memories that Mrs. Grace Doty of Vermontville has, for it was her marriage to the late Seymour Doty that was being honored. And it not only made a SPECIAL run, but it was the LAST run ever made by the old train. The logging operations were pretty well completed at Roakdale and soon the mill was moved to Onchiota, nearer to big timber, where it was rebuilt on the shore of Oregon Pond. Either before or after the moving Mr. Roak sold the mill to Baker and Odell of Plattsburgh, and it was operated by them at Onchiota until 1913 or 14.