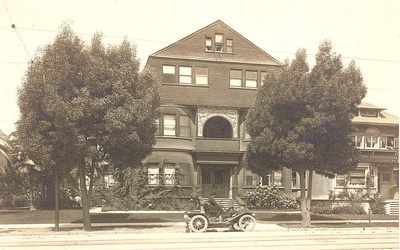 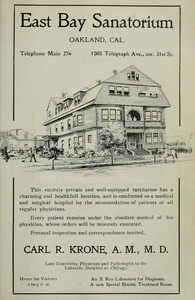 1903 directory 1The East Bay Sanatorium (sometimes spelled Sanitorium or Sanitarium) and Training School for Nurses was a small private hospital and training school for nurses from 1896 3 to c.1921. It was on Telegraph Ave. just north of 31st Street.

It was originally run by Dr. Carl Rudolph Krone, resident physician and surgeon. NB: A later address renumbering changed 1505 (also shown as 1515) to 3113.

In 1909, Carol Pardee, daughter of George Pardee, had an operation at the sanatorium for appendicitis. 10 In 1912, Ann McElrath, daughter of John Edgar McElrath, was treated for a burn on her arm, suffered during a fire at the family home. 8 Near the end of his life, Severin Anderson, father of Harry S. Anderson, fell ill and had an operation at the sanatorium. 9

It's unclear what year the sanatorium closed. A 1921 article refers for plans for a modern, $650,000 hospital "at the site formerly occupied by the East Bay Sanitorium," 5 but there is a reference in a 1923 article to the sanatorium. 6 It is also listed in the 1921 Journal of American Medicine. 7 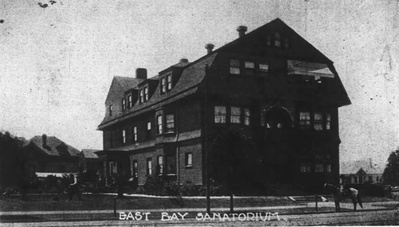 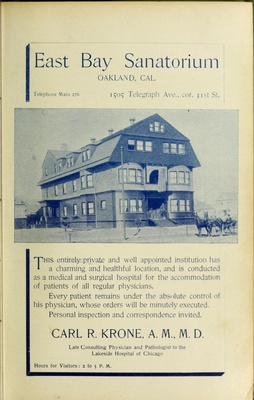